English is the second most spoken language after Mandarin. UN English Language Day is celebrated on the 23rd of April. The date of the day is also traditionally marked and thought to be as the day of both the birthday and the death anniversary of William Shakespeare. Here are some fun facts you should know about the English Language. 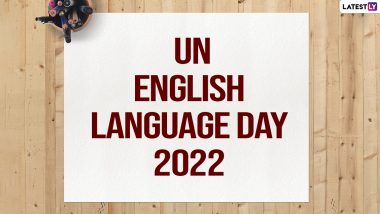 UN English Language Day is celebrated on the 23rd of April after the  Department of Global Communications of the UN established language days for each of the organization's six official languages to promote multilingualism and equal representation of all official languages. The date of the day is also traditionally marked and thought to be as the day of both the birthday and the death anniversary of William Shakespeare. English is the second most spoken language after Mandarin. Chinese Language Day 2022: Ten Commonly Used Chinese Words and Basic Mandarin Phrases To Know if You Love Learning New Languages!

The English language is quite fascinating and is spoken by 840 million people. The language has official status in 67 countries as well as 27 non-sovereign entities such as Hong Kong or Puerto Rico. To commemorate this day, here are some really interesting facts about the English Language that you should know about.

Fun Facts About the English Language

1. The longest word in the English language is ‘pneumonoultramicroscopicsilicovolcanoconiosis’ which is a lung disease but the doctors never use the actual medical term.

2. A new word is added to the dictionary every two hours, which means 4000 new words are added every year.

3. The letter 'E' is present in 11% of the entire English Language.

5. A sentence that uses every alphabet is called a Pangram. The most famous pangram is 'The quick brown fox jumps over the lazy dog'.

6. In 1755, the first English dictionary was published.

7. 'Time' is the most commonly used noun.

8. The shortest complete sentence in the English Language is "I Am"

9. Words that can have contradictory meanings in a different context are called contronyms and the English language is filled with them.

10. I and You are the two most common words in the English Language.

English as a language is filled with little quirks and new words keep developing and being added to the dictionary. The language is used to store 80% of the world's information on computers and is the first and only language a lot of people know since the day they are born. UN English Language Day is celebrated to observe the impact the English Language has had on the world and cultures.

(The above story first appeared on LatestLY on Apr 23, 2022 08:13 AM IST. For more news and updates on politics, world, sports, entertainment and lifestyle, log on to our website latestly.com).