Viral Memes of the Week: From Met Gala 2019 to Terror Head Abu Bakr al-Baghdadi's Hilarious Photoshops, Here Are Some of the Funniest Memes

One of the major attractions of the internet were Met Gala 2019 that gave meme creators more than enough content to show off their creative skills. 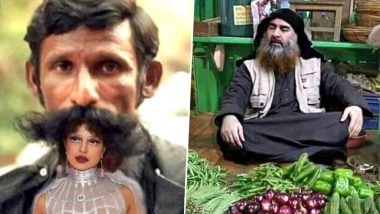 The week that ended kept meme-makers quite busy with different events grabbing eyeballs internationally. One of the major attractions of the internet were Met Gala 2019 that gave meme creators more than enough content to show off their creative skills. Eye-popping dresses of celebrities which explained exaggeration to perfection was the theme of the day and social media like always, couldn't stop laughing. Met Gala 2019 Funny Memes And GIFs: Priyanka Chopra to Cardi B, All the Celebs Who Entered Met Ball Hall of Memes This Year.

While most of the internet is still trying to figure out what was our dear celebs' inspiration for the event, Sri Lankans rightly took time out to troll ISIS Leader, Abu Bakr al-Baghdadi, The ISIS head who had managed to evade the public eye since 2014 was seen in a video released by the terrorist group on April 29. As the video was shared widely on social media, Sri Lankans took a still from it and photoshopped Baghdadi into places he would have probably not seen before or want to be. The social media trolling of Baghdadi comes after ISIS took responsibility of bombings in church on Easter Sunday last month.

Another person who went viral thanks to her celebrity parents is Luna. While Chrissy Teigen has been subject to memes on multiple occasions, her three-year-old daughter stunned everyone with her skills at such an early age. After Chrissy shared Luna's photo saying that both their expressions matched, her picture went viral inspiring many memes. While we were also expecting memes on the Bollywood movie Student of The Year 2, not much has been populated on Twitter yet. And as the week comes to and we present to you, the best Viral Memes of the Week.

Baghdadi in places he has not been before

For all Game of Thrones' fans in the house

This is so true.😁

The only one who took red carpet seriously!

A post shared by Indian Storytellers (@indianstorytellers) on May 7, 2019 at 2:13am PDT

Me looking back on this semester https://t.co/gvCKEjSzxb

That is quite a possibility!

When I listen to my own recorded voice https://t.co/FAlxI7X1Fq

As Detective Pikachu hit theatres on Friday, a 'leaked' version of the film showed Pikachu dancing joyfully. As the video went viral, people came up with hilarious memes and Avenger lovers mixed it with the theme song.

Watch the meme video below:

While these are some of the most popular viral memes of the week, social media continues to churn out much more. We hope these memes gave you a good laugh. While our personal favourite is the Met Gala memes, we would like to know what you guys liked. Do let us know in the comment section below.

(The above story first appeared on LatestLY on May 11, 2019 12:54 PM IST. For more news and updates on politics, world, sports, entertainment and lifestyle, log on to our website latestly.com).