Student of the Year 2 is nothing but a star-vehicle for Tiger Shroff, while also making some space for Tara and Ananya. 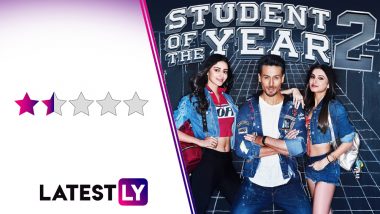 The first Student of the Year film, despite giving us three future stars in Alia Bhatt, Varun Dhawan and Sidharth Malhotra, was considered as Karan Johar's weakest effort to date. Sure, it worked at the box office, but has any movie of his got as much trolled as SOTY? Now, seven years later, Karan Johar comes out with Student of the Year 2, perhaps as the way to avenge those who couldn't identify the hidden genius of the first film. Sorry, Mr Johar, I was one among those! Will Tiger Shroff Starrer Student Of The Year 2 Fare Well at the Box Office Despite Avengers: Endgame? Find Out!

Rohan (Tiger Shroff) is the star of his gareeb college, Pishorilal Chamandas College of Dehradun (of course, gareeb colleges in the world of SOTY needs to have a tacky name). Rohan, however, wants to get into the prestigious St Teresa's in Mussoorie, just so that he can be close to his childhood love, Mridula (Tara Sutaria).

Thanks to a sports scholarship, Rohan's dream come true and he gets admitted to St Teresa's. But things don't move the way he wants to. Mridula has rechristened herself as Mia and wants to stay away from the middle-class Rohan as far as possible. Moreover, Rohan also has to deal with two siblings, a bratty Shreya (Ananya Panday) and her over-achiever, arrogant brother, Manav (Aditya Seal), who is the star performer of the college.

With Student of the Year trophy on the anvil, personal equations between Rohan, Mia, Shreya and Manav are going to be challenged and at one point, Rohan even loses the ground to compete on.

You thought the first Student of the Year was a joke? Well, bro, the joke is on you! The sequel will make you realise why. Punit Malhotra, who was handed the reins of the film, has stripped the franchise of whatever little soul and nuance the first film grudgingly held on to itself. While it aims to replicate the spirit of the first film, SOTY2 is just another film to display Tiger Shroff's irritating aversion on staying 'grounded'.

The interesting bit is that, that the sequel tries to poke fun of the shallowness of the original SOTY and its utopian St Teresa's College (where students openly make out in the grounds, but one slap off the premise can get you rusticated), by pitting it against the underdog, underprivileged (by Dharma standards) Pishorilals. It trolls the much derided 'Ishq Wala Love' from SOTY, and as a bonus, even has Tiger take a dig at his own 'A Flying Jatt'.

While this self-deprecatory humour is welcome, it would have been better if the sequel didn't look a stripped down version of the first film. As expected, Student of the Year 2 generously borrows tropes from the first film. Rich frames (courtesy Ravi K Chandran), dance-offs, ego clashes, changing romantic equations, a haughty rich father, a gay teacher... the checklist is ready.

But what Student of the Year 2 doesn't have is better writing (told ya... SOTY was genius), interesting character arcs and better supporting characters. Like for example, Rishi Kapoor's gay principal in the first SOTY was criticised then for being a caricature. At least he mattered to the plot. Here, the token gay character is inserted just for the sake of it, and never given any importance ahead.

There are some things that the sequel does that is as much as bad as the original. Like there are no studies. The only time, we actually see the characters in the class ahem...ahem... 'learning', gets interrupted for some random incident.

Also the romance sucks. The love triangle in SOTY 2 is Bollywood romance at its cheesiest. There is a moment in the film where Rohan, Shreya and Mia indulge in a serious discussion of hearts. A handsome doctor passes by, and both the girls ignore Rohan for a second and checks him out. Why, Punit, why couldn't we have more such moments in the film that goes beyond the trite romance that you had to offer here? Student of the Year 2 Song Fakira: Tiger Shroff and Ananya Panday’s Romantic Ballad Strikes a Chord With the Audience.

Sure, Alia's character in the first film was stuck in the testosterone war of the two male leads, but at least she had something to do in the so-called SOTY contest. In Student of the Year 2, the females are all about looking pretty in their minis. Their competitiveness is restricted purely to dance competitions and fighting for Rohan's attention. Now, why should the girls compete in sports? Shudder... what a horrible thought!

That brings us to the crux of the film - the so-called Student of the Year competition. Well, this time, the makers listened to the haters and concentrated purely on sports, removing that needless treasure hunts and exams (because for Dharma, Student = Good Jumps + Good Figure - Studies). And even girls!

What it does is, instead, become a soul-less version of Aamir Khan's Jo Jeeta Wohi Sikander, sans none of its tension. So all you get to see is Tiger Shroff doing acrobatics all across the field. Bhai, zameen se kya problem hai tumhe?

Watch the trailer of Student of the Year 2 here:

The final kabaddi match is so predictable, that I started yearning to see the same sport in Subhash Ghai's Pardes. At least, the kabaddi match there came out of nowhere and had so much real tension!

Even Vishal-Shekhar's songs are surprisingly listless. As for that much talked about Will Smith cameo, it comes and goes, before you exclaim, "Hey Agent J!"

Tiger Shroff is the best part of the film, because he gives his fans what they want - high-flying kicks, terrific dance moves and gratuitous display of his abs. His performance is also endurable as Tiger is very much in his comfort zone. He is pretty much hilarious in the scene where he tries to seduce his gym teacher. Most of the scenes, though, depends on his body anatomy rather than his expressions.

Tara Sutaria as the opportunistic Mia does good in a kitschily-written role. Ananya Panday is the surprise package. She pulls off the ignored rich brat (that Varun did in the first film) quite convincingly, and her chirpy act is sweet. Only wish that the film made these two girls more than two PYT's fighting for male attention. Aditya Seal is adequately smarmy as the arrogant rival, Manav, even though like the film, he lacks any dimension or nuance. Popular YouTube sensation Harsh Beniwal contributes to some of the film's lighter moments.

- Too Much of a Star Vehicle

Student of the Year 2 proves Albert Einstein's Theory of Relativity right - in comparison, it makes the first film look like an under-appreciated masterpiece. Despite taking the franchise ahead, Student of the Year 2 is nothing but a star-vehicle for Tiger Shroff,  while also making some space for Tara and Ananya. Quite underwhelming!

PS - In an interview, director Punit Malhotra had joked that Student of the Year 2 might have Taimur in the lead. I hope by then they also figure out how colleges in India actually function.

(The above story first appeared on LatestLY on May 10, 2019 01:25 PM IST. For more news and updates on politics, world, sports, entertainment and lifestyle, log on to our website latestly.com).