India also witnessed the first phase of polling for Lok Sabha Elections 2019 on April 11 paving way for a set of viral videos from different states of the country. 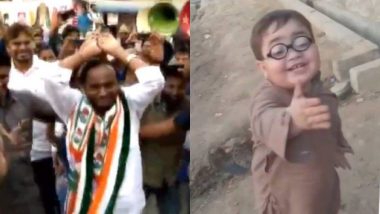 As the week comes to an end, we take a look back some of the videos that went viral across social media platforms. From a cute Pathani kid's banter to a scary dust storm in Rajasthan, we have made a list of some of the clips that amused internet users this week. India also witnessed the first phase of polling for Lok Sabha Elections 2019 on April 11 paving way for another set of viral videos from different states of the country. From which, a voter from Bandipora in Jammu and Kashmir dancing on his way to the polling booth is our favourite.

A girl from Kerala who galloped on a horse on her way to Class 10 exams became the talk of internet town earlier this week. Another video that was shared widely on social media was of a Karnataka Minister named Nagaraj who danced to Nagin music during the election campaign. And as the week comes to an end, we take a look back at the videos which made it to the headlines. Dog Videos Ruled This Week! Watch Top Viral Clips That Touched Millions of Hearts.

Video of a massive storm captured on camera in Rajasthan had gone viral on social media. As it was shared widely, internet users suggested that it looked straight out of a movie showing apocalypse. The dust storm had hit various parts of Churu in Rajasthan.

Video of a girl from Kerala riding a horse on her way to Class 10 exams had gone viral on social media. CA Krishna Rides from Mala town of Thrissur district said that she has two horses at home and had been learning to ride a horse for three years. Krishna said that she wanted to ride a horse to her exam and has been planning it for quite some time. The video of Krishna riding a horse was also shared by Mahindra Group chairman Anand Mahindra. He tweeted saying, "Brilliant! Girls’ education is galloping ahead...A clip that deserves to go viral globally. This, too, is #IncredibleIndia."

Now comes cuteness dose of the week! The video of this Pathani boy went viral this week amusing social media users with some comparing him to actors Saif Ali Khan and Kareena Kapoor Khan' son Taimur Ali Khan. The little one saying  'Piche Dekho' to his relatives have even resulted in memes and jokes on Twitter.

Karnataka Housing minister MTB Nagaraj couldn't stop himself with the live band that was following his convoy during Lok Sabha polls 2019 began to play the popular Nagin music. Video of the minister showing off his moves went viral on social media with people pointing out that how minister Nagaraj, which means King Cobra danced to the Nagin music which also refers to snakes.

5. Plane Slows Down for Flamingo

A pink flamingo made a plane slow down after landing as it slowly walked on the runway. The incident happened at Palma de Mallocra Airport on a Spanish island. The funny video was shared widely on social media with people laughing at how a bird made the plane stop.

6. Voter dancing outside a polling booth in Jammu and Kashmir

#LokSabhaElections2019 this dancing voter can simply be the image of the day,#Ballot wins over #Bullet, Enthused voter in Naidkhai area of #Bandipora, voters snub boycott calls given by #Pakistan backed #Terrorist, and celebrate #Democracy pic.twitter.com/L1Y02Y3epE

As voters line up outside a polling booth, a thrilled voter from Bandipora in Baramulla constituency in Jammu and Kashmir decided to dance. And now his video has gone viral on the internet with people praising his dance moves.

With the vast presence of social media across nations, we come across something every day. From knowing a culture or tradition to encouraging talents, social media has paved the way for various things that amuse us on a day-to-day basis. We promise to bring more amazing videos from around the world next weekend!

(The above story first appeared on LatestLY on Apr 13, 2019 10:52 AM IST. For more news and updates on politics, world, sports, entertainment and lifestyle, log on to our website latestly.com).