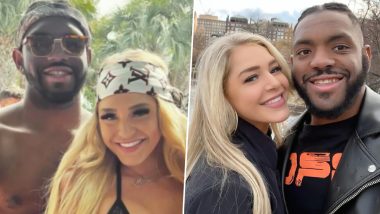 Courtney Clenney, who goes by the Instagram name Courtney Tailor, was recently charged with the alleged murder of her boyfriend Christian Obumseli and was arrested by the authorities on August 11, Thursday, in Hawaii. Her arrest came after the death of her 27-year-old boyfriend, Obumseli, who was stabbed and found dead in Miami in the month of April 2022. Courtney’s defence attorney, Frank Prieto, claimed that she acted in self-defence after Obumseli choked her in her luxurious Miami apartment. However, the police took her in custody for second-degree murder charges against her live-in boyfriend and the influencer still awaits her extradition to Florida. As the model made headlines for stabbing Obumseli in April, here’s everything to know about Courtney Clenney and her murder case. You can check the complete details of who is Courtney Clenney and how the XXX OnlyFans model was charged for murdering her boyfriend.

Who is Courtney Clenney?

Born on April 21, 1996, Courtney Clenney is an Instagram model who has a strong fanbase with two million people following her on the photo-sharing website. She also has a robust fan following on OnlyFans, an adult entertainment website. She is an active social media user who creates sexually-attractive content for her fans. The model rose to fame after featuring in several fashion competitions. She even starred in advertisements for Pepsi, Celebration Church and Discount Dollars. Recently, the 26-year-old influencer was charged with the murder of her then-boyfriend Christian Toby Obumseli. It is known that the couple dated for two years, but they were separated at the time when Obumseli was found dead in her apartment. XXX OnlyFans Model Courtney Clenney Charged With Killing Live-in Boyfriend in Florida

Courtney's Reel Showing Off Her Sultry Side

On April 3, 2022, the police received a call from Courtney who informed the officers about her boyfriend’s death. She said that Obumseli caught her throat and she stabbed him with a kitchen knife in self-defence. Upon reaching Courtney’s apartment, the police found Obumseli drenched in blood and took him to the hospital immediately, where he was pronounced dead. An investigation soon began, which brought Courtney Clenney into light as the Miami-Dade State Attorney Katherine Fernandez Rundle charged her with second-degree murder of her boyfriend with a deadly weapon. “The county medical examiner said in an autopsy report that Obumseli died from a forceful downward thrust from a blade that went three inches into his chest, piercing a major artery,” quoted USA Today. It has also been reported that Clenney was in the rehabilitation centre after she suffered from post-traumatic stress disorder and substance abuse post her boyfriend’s death four months back. Amidst the charges, an old video of Courtney abusing Obumseli in an elevator went viral on social media which highlighted her domestically abusive behaviour. Courtney Clenney, XXX OnlyFans Model Caught in Elevator Video Beating Boyfriend Christian Obumseli She Later Murdered

A post shared by The Gworls Are Fighting (@thegworlsarefightingg)

Lawyer Larry Handfield, who represents Obumseli’s family, asked the police to reopen the investigation, which led to Courtney’s recent arrest in Hawaii. Clenney is being held at the East Hawaii Detention Center before her initial court appearance that was scheduled for Thursday in Hilo District Court. The latest conjecture revolving around the murder case is yet to surface!

(The above story first appeared on LatestLY on Aug 12, 2022 12:41 PM IST. For more news and updates on politics, world, sports, entertainment and lifestyle, log on to our website latestly.com).