World War 3 Jokes and Memes are NOT Funny! Twitterati Ask for Peace as WWIII Threat Looms

It is 2020 and unfortunately, we share the world with people who believe something as massively destructive as a World Warm is a joke. While memes have become one of the most important parts of our daily lives and have made us laugh even at our worst, but World War 3 memes and jokes? They have gone way too far. 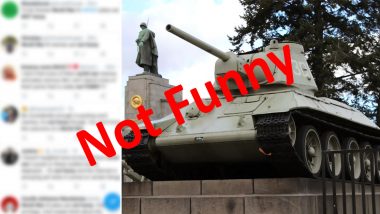 It is 2020 and unfortunately, we share the world with people who believe something as massively destructive as a World Warm is a joke. While memes have become one of the most important parts of our daily lives and have made us laugh even at our worst, but World War 3 memes and jokes? They have gone way too far. To our disbelief, we woke up a day before with World War 3 trending on social media. Most of the people were shocked and scared at the same time. Turns out, some people were taking a political situation as an opportunity to make memes and jokes. It all began after the killing of the Iranian leader's second in command in a US airstrike. United States President Donald Trump ordered the killing of Iranian general Qassem Soleimani who died in Baghdad "in a decisive defensive action to protect US personnel abroad". World War 3 Funny Memes Take Over Twitter As Netizens Try Hard To Not Think The Worst After US Drone Strike Kills Iranian Major General Qassem Soleimani.

Twitter was flooded with memes and jokes about how this could lead to a WW3. It is both scary and disappointing to see how easily, the magnitude of destruction caused by a World War, has been belittled in the form of memes and jokes. Assuming that most people haven't considered the apocalyptic results of World War 3, these "funny" memes and jokes are way beyond comprehension now. However, the other half of netizens have been actively dissuading these memes and jokes and are trying to explain online, what a real WW3 has the capacity to do. Take a look at some tweets:

hey y’all for those of us that

-are from the Middle East

-have family in the military

-are directly affected by deployments

the world war 3 jokes ain’t jokes. everyone has a stake in this - peace is the only good outcome

Your world war 3 jokes ARE NOT FUNNY. Thank you for laughing at the expense of the lives of thousands of u.s soldiers and their families who have to say goodbye, not knowing if they will get to say hello again.

World War 3 !?, why are people making jokes about it like its really not funny , ya'll making jokes when real people are gonna die

NOT Funny At All

It’s crazy how the internet makes a joke out of something so serious.. WORLD WAR 3. It’s not funny at all, I’m fucking terrified.

Not Even A bit

The memes about “world war 3” are getting on my nerves. There is nothing funny about it. If it actually happens, countries like syria and iraq will end up being the battlefield and innocent people will end up getting killed. Not funny. Nothing to joke about.

(The above story first appeared on LatestLY on Jan 05, 2020 09:52 AM IST. For more news and updates on politics, world, sports, entertainment and lifestyle, log on to our website latestly.com).