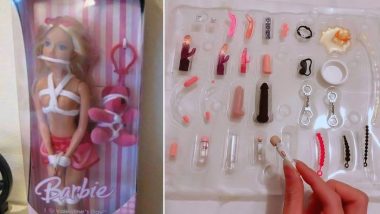 However, this left Twitter users horrified! "What the actual f*ck? i'm gonna have nightmares because you liked this shit and it showed up on my tl so thankyou, warmest regards :)", read one tweet. "What edition is it ?

Barbie Anastasia Steele Edition?", read another tweet. "I CAN'T BELIEVE THAT THIS IS REAL OH MY GOD", read yet another tweet. in 2019, as the doll reached her 60th anniversary. These dolls are very popular and about 30 Barbies are sold every hour in the United States. In 2015, Mattel responded to decades of criticism and launched 'diverse' Barbies like the ones with new body types, a wheelchair-using Barbie, a doll with a prosthetic limb, etc.

(The above story first appeared on LatestLY on Jan 20, 2021 02:48 PM IST. For more news and updates on politics, world, sports, entertainment and lifestyle, log on to our website latestly.com).