New years is almost here and I think I say this on behalf of a lot of people, this has been one heck of a year! The social media dominated year was full of viral memes, jokes, cute baby and animal videos, funny pranks, etc. However, a fair share of social media attention was grabbed by NSFW videos as well. 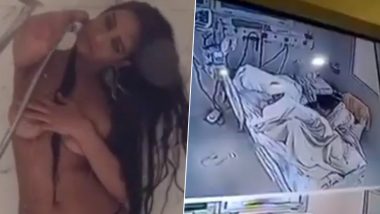 This year some of the celebrities too didn't hold it back and bared it all on social media.  Well, not like we are complaining, but these videos raked a lot of views and social media attention. Take a look at some of the most popular ones in 2019.

Couples drunk in alcohol and love, went ahead to fulfil their sexual urges on a ScotRail train without caring for the CCTV cameras. The footage of the couple having sex went viral in no time

Deer Trying to Have Sex with a Doe Figurine

Well, you can forgive them because, they are animals. But this viral video was hilarious. The deer could be seen trying to have intercourse with a doe figurine and soon the head of the statue falls off. The feer is then taken aback and the whole scene is one fun-filled ride.

Drunk Man Caught ‘Having Sex’ With a Cleaning Cone

Told you, humans are worse than animals. This one man was caught trying to have sex with a cleaning cone and it is beyond hilarious. This NSFW video went viral in no time. The man was sitting on a Wigan Railway station lift with his trousers and pants around his ankles and a cone on his lap.

Gender reveal videos have gone out of hand and this one video is proof. A woman legit farted out the colour blue to reveal that the couple was going to have a baby boy!

Couple Caught Having Sex at The Backseat of Double Decker Bus

Why leave any mode of transport at all? A couple was caught having sex at the back of a double-decker bus as it travelled through Prestwich. The video obviously grabbed eyeballs.

This explicit nude video was a reply to the people who circulated her photoshopped image from her appearance at the Billboard Music Awards. She stripped to a barely-there thong and legit asked the trolls to STFU.

Aren't these just insane? And these are just a few of so many such videos that went viral. It is needless to say that people should stop doing such things in public but, honestly, we really don't know what 2020 has in store for us. LOL.

(The above story first appeared on LatestLY on Dec 28, 2019 04:40 PM IST. For more news and updates on politics, world, sports, entertainment and lifestyle, log on to our website latestly.com).