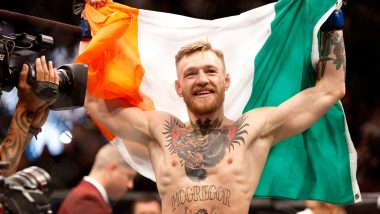 Irish MMA superstar, Conor McGregor, despite fighting just once, was the sporting world's highest-paid athlete over the last 12 months with earnings over $180 million, boosted by his ventures outside of the Octagon. The Mixed-Martial Artist trumped sporting heavyweights such as Lionel Messi, Cristiano Ronaldo, LeBron James and Lewis Hamilton in a pandemic stricken year to become the highest earner. Forbes List of India's 10 Richest Billionaires: Mukesh Ambani Tops List Followed by Gautam Adani And Shiv Nadar; Check Complete List Here.

According to a recent report from Forbes, Conor McGregor topped the World’s Top-10 Highest-Paid Athletes list, who took home pretax gross earnings of $1.05 billion during the past 12 months, 28% more than last year’s top earners. The Irishman earned $180 million last year with the bulk of his earnings coming from the sale of the majority stake in whiskey brand Proper No. Twelve to Proximo Spirits for $150 million.

Conor McGregor hasn’t been much active in the octagon in recent years but fought at UFC 257 in January 2021, losing to Dustin Poirier, his first fight since January 2020. The Irish superstar earned $22 Million from the fight with the other $158 million of his earnings coming from the sale of Proper Whiskey's majority stake and endorsements that include DraftKings, the video game Dystopia: Contest of Heroes and the lifestyle brand Roots of Fight.

The UFC fighter is followed by Barcelona superstar Lionel Messi, who earned a total of $130 in 2020 with a majority of it coming from his mammoth salary at the club. The Argentine is followed by Cristiano Ronaldo ($120m), Dallas Cowboys’ quarter-back Dak Prescott ($107.5m), LeBron James ($96.5m) and Neymar Jr ($95m).

This is the first time Conor McGregor has topped Forbes’ highest-paid athletes' list and is in the top ten for the second time after landing at fourth spot with $99 million in 2018 following the big-money fight against Floyd Mayweather. The 32-year-old is also only third athlete after Roger Federer and Tiger Woods, to earn more than $70 million off the field in a single year while still actively competing.

(The above story first appeared on LatestLY on May 13, 2021 09:20 AM IST. For more news and updates on politics, world, sports, entertainment and lifestyle, log on to our website latestly.com).