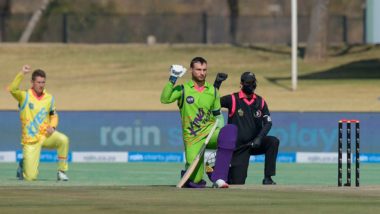 At the start of 3TCricket Solidarity Cup South African players including AB de Villiers, Cricket South Africa Director Graeme Smith and former cricketer Makhaya Ntini took a knee in support of the Black Lives Matter movement. 3TC is a fun-raising 36-over cricket match which involves three teams. The three teams will face-off each other turn by turn in a single match. Ahead of the start, the players showed support for the BLM campaign and everyone present at the ground took a knee. 3TC Solidarity Cup Live Streaming Online on Disney+ Hotstar: How to Watch Free Live TV Telecast of Cricket South Africa’s New Format Match on Star Sports in India.

Smith, the former South African captain, had earlier expressed his support for the Black Lives Matter campaign. "As a Director of Cricket at Cricket South Africa, a former Protea and captain, a team-mate, a father, a brother, a friend and most importantly fellow South African, I am proud to support this incredible important movement. There is no room for neutrality on this topic. I stand with Lungi Ngidi and our brothers and sisters around the world. I will join the teams tomorrow in taking the knee at the 3TC Solidarity Cup,” Smith tweeted.

In Support of BLM

Players and officials took a knee before the start of the #SolidarityCup in support of #BlackLivesMatter #3TCricket pic.twitter.com/4Lk4WHou8n

Three teams taking part in the 3TC Solidarity Cup are Eagles captained by AB de Villiers, Kites captained by Temba Bavuma, and Kingfishers captained by Reeza Hendricks. The exhibition match brings the live cricket in South Africa back for the first time amid coronavirus pandemic.

(The above story first appeared on LatestLY on Jul 18, 2020 03:50 PM IST. For more news and updates on politics, world, sports, entertainment and lifestyle, log on to our website latestly.com).