Earlier, opting to bat first, Afghanistan scored 190/4 at the end of 20 overs. Najibullah Zadran was dismissed on the final ball of the innings after he smashed 59 off 34 balls to steer Afghanistan to 190. 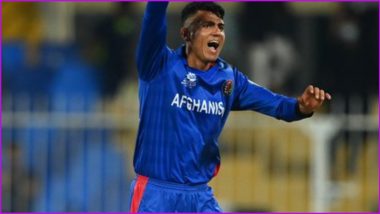 Mujeeb Ur Rahman stole the show with his fifer as Afghanistan thrashed Scotland by 130 runs in the Group 2 match of the ongoing T20 World Cup. If Mujeeb picked five, Rashid Khan took four wickets to dismantle Scotland batting as the five batsmen registered ducks during the chase. Chasing 191, Scotland crumbled as Mujeeb picked three wickets in the fourth over. From there on Scotland never really recovered as the side kept losing wickets at regular intervals. Afghanistan vs Scotland Highlights of T20 World Cup 2021 Match 17: AFG Win by 130 Runs.

Mujeeb came back to pick two more wickets as Scotland got reduced 45/7 in the eighth over. In the end, Scotland was folded for 60 runs in the 11th over as Rashid took two wickets in two balls.

Earlier, opting to bat first, Afghanistan scored 190/4 at the end of 20 overs. Najibullah Zadran was dismissed on the final ball of the innings after he smashed 59 off 34 balls to steer Afghanistan to 190.

# This is Afghanistan’s biggest win in T20 World Cups.

# This is Afghanistan’s biggest win in T20Is.

# Nine batters dismissed bowled or LBW in the Scotland innings, most ever in a T20I.

Afghanistan got off to a blazing start as openers Hazratullah Zazai and Mohammad Shahzad whacked boundaries in the powerplay and took their side over the 50-run mark within six overs. While Shahzad scored 22, Zazai missed out on fifty as his blistering knock of 44 came to an end in the 10 over.

Rahmanullah Gurbaz and Najibullah Zadran then stitched an 87-run stand for the third wicket. While Gurbaz departed in the 19th over, Najibullah took Afghanistan to 190 before being dismissed.

(The above story first appeared on LatestLY on Oct 25, 2021 11:28 PM IST. For more news and updates on politics, world, sports, entertainment and lifestyle, log on to our website latestly.com).