Ajinkya Rahane Birthday Special: Did You Know 'Jinx' Has Picked One Wicket in IPL And That Too for Mumbai Indians? 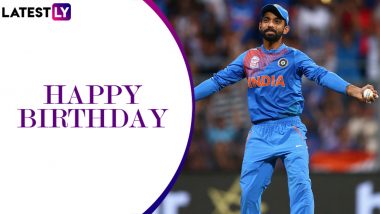 Ajinkya Rahane is known for his batting prowess and rightly so. The cricketer has nothing to boast about when it comes to bowling. However, his bowling column isn’t empty. Surprised? What if we tell you Rahane once bowled in the Indian Premier League (IPL). And, not just that, he, in fact, managed to pick a wicket as well. Rahane, born on June 06, 1988, in Ashwi Khurd, Maharashtra, is celebrating his 32nd birthday today. And as the cricketer turns a year old, we bring you an interesting incident when Rahane picked his first and lone IPL wicket. Ajinkya Rahane Shares His Daily Routine; From Karate Practice to Playing With Daughter Aarya This Is How the Mumbai Batsman Is Spending Time at Home (Watch Video)

Rahane started his IPL career in the Mumbai Indians camp before being bought by Rajasthan Royals in 2011. Till 2019, Rahane was part of Royals camp and ahead of IPL 2020, which currently stands postponed indefinitely due to coronavirus, he was traded to Delhi Capitals. In 140 IPL matches, Rahane has bowled once, that too one over. In international cricket the 32-year-old has never bowled, but in First-Class and List A cricket, Rahane has had an opportunity to roll his arm on few occasions.

The incident took place during IPL 2009 in Centurion when Sachin Tendulkar-led Mumbai Indians were up against Yuvraj Singh’s Kings XI Punjab. For the uninitiated, IPL 2009 was held in South Africa due to general elections in India. Batting first, KXIP lost six wickets for just 79 runs inside 12 overs. The pitch was assisting spinners. Mumbai’s spinners Harbhajan Singh and JP Duminy had picked three wickets and given away only 24 runs in eight overs between them. Ajinkya Rahane Walks Down Memory Lane, Revisits Well-Spent Times With Loved Ones Amid Lockdown!

Tendulkar sensed an opportunity to further dent KXIP with spin, and thus he introduced the young Rahane into the attack in the 15th over. And, boy, Rahane did not disappoint his captain as he scalped a wicket on his third ball by cleaning up Luke Pomersbach. Rahane tossed up the ball and pitched it on the leg. Pomersbach, who was down the pitch, was looking to whip the ball towards the leg-side. The batsman, however, missed the ball and was bowled. Thus, ended up gifting Rahane is first and only IPL wicket. Rahane then finished with figures of 1/5 in 1 over.

Kings XI Punjab were restricted to paltry 119/9 in their allotted 20 overs, and Mumbai Indians won the match by eight wickets. Rahane, however, failed with the bat as he managed to score just one run off five balls while coming in to bat at number three ahead of skipper Tendulkar.

(The above story first appeared on LatestLY on Jun 06, 2020 11:00 AM IST. For more news and updates on politics, world, sports, entertainment and lifestyle, log on to our website latestly.com).