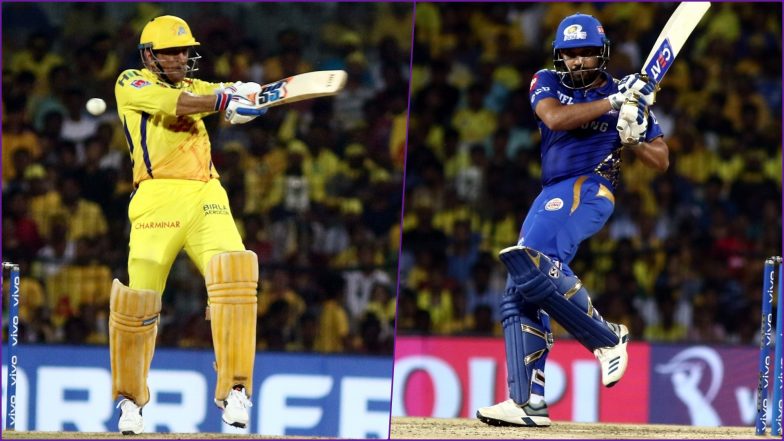 Mumbai Indians (MI) clinched the top spot on the last day of the VIVO Indian Premier League stage campaign with a win over Kolkata Knight Riders (KKR) pushing arch rivals Chennai Super Kings (CSK) to the second spot. MI and CSK now meet in Qualifier 1 of the IPL 2019 at MA Chidambaram Stadium, Chennai with a chance to book a slot in the final. With two of the strongest teams in tournaments history in action, the buzz surrounding the game is bound to be huge. If we look at their CSK vs MI head to head record, in the 28 games they have played together- Mumbai Indians have won 16 while Chennai Super Kings have come up with 12 wins. Let us have a look at their last five games. CSK vs MI, IPL 2019 Qualifier 1 Match Preview: Chennai Super Kings, Mumbai Indians to Lock Horns at MA Chidambaram Stadium For Spot In Final.

On a slow turner of Chepauk, the Mumbai batsmen did well to put 155 on board in first innings to set up an interesting game. Chennai chase could never quite take off thanks largely to the brilliance of Lasith Malinga who picked up four crucial wickets. His efforts restricted the hosts to just 109 in 17.4 overs as they lost by 46 runs.

Suryakumar Yadav hit 59 and teammate Krunal Pandya came up with 42 runs to help Mumbai reach 170/5 in their twenty overs. But what should have been an easy chase for Chennai considering their form at the start of the season turned out to be just the opposite. They could only muster 133/8 in their response with the home team winning by 37 runs.

Suresh Raina’s 75 helped Chennai Super Kings helped reach 169/5 batting first but they could have got another twenty runs had the lower order contributed more. The likes of Dwayne Bravo and Sam Billings got out cheaply to hand the initiative to Mumbai. They chased won the total with ease with the top three of – Suryakumar Yadav, Evin Lewis and Rohit Sharma all performing well.

The inaugural game of the 2018 Indian Premier League was a thriller with the heroics of Kedar Jadhav winning the game for Chennai right at the very end. Earlier Mumbai Indians has set a target of 166 for the visitors to win. Hardik Pandya and Mayank Markande picked up three wickets each to stifle Chennai, but Dwayne Bravo’s 68 coupled with Jadhav’s grit won them the game.

Mumbai Indians won the final of 2015 IPL in spectacular fashion as both their batting and bowling units delivered on the big stage. Lendl Simmons blasted 68 and skipper Rohit Sharma chipped in with a fifty to take Mumbai past the double hundred mark. In reply, Dwyane Smith played a lone hand with 57 as CSK folded for 161. Mitchell McClenaghan was the pick of the bowlers for Mumbai with three wickets.

Mumbai have already done the double over Chennai this season, and their momentum just might get them their third victory in a row to seal a final spot.