England vs Australia 2nd ODI 2020: Jonny Bairstow vs Josh Hazlewood and Other Exciting Mini Battles to Watch Out in Manchester 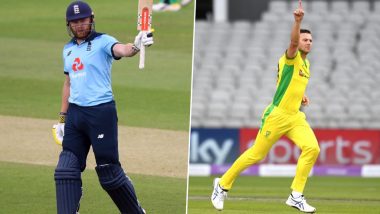 After a dismal performance in the T20I series, Australia made an emphatic start to ODIs by defeating England in the opening encounter by 19 runs. Stakes are very high in the second ODI as Aaron Finch’s men are aiming to seal the series 2-0 while it’s a must-win game for the home team. The upcoming match will be played at the Emirates Old Trafford in Manchester on September 13. Notably, the Three Lions haven’t lost a bilateral ODI series for the last two years. Hence, it will be interesting to see if the record will be extended or the Aussies will break the streak. Michael Holding Lashes Out at England and Australia for Not Taking a Knee.

Australia put on an all-round performance in the first ODI, and they must be high on confidence. Mitchell Marsh, Glenn Maxwell and Marcus Stoinis made a mark with the bat while Josh Hazlewood and Adam Zampa shone with the ball in hand. On the other hand, England were let down by veterans like Jason Roy, Joe Root, Eoin Morgan and Jos Buttler who failed to make an impact while chasing 295. Nevertheless, Jonny Bairstow (84) and Sam Billings (118) made a fightback and gave their all to guide their team to victory. As the second ODI of the series takes a countdown, let’s look at some mini battles which can enhance the thrill of the encounter.

The swashbuckling Aussie opener has been troubled continuously by Archer throughout the ongoing tour. In fact, Warner fell prey to the England pacer in all the three games he participated. Hence, the right-arm speedster will again look to send Warner back to the pavilion early in the innings while the left-handed opener must rectify his mistake to make a mark in the second ODI.

Hazlewood ran through England’s top order with the new ball in the previous match. However, Bairstow didn’t put his guards down and played a fighting knocks. He assessed the conditions well early in the innings before scoring runs rapidly in the latter half of his innings. The star opener, however, failed to take his side over the line but will be determined to get a different result in the upcoming game.

Buttler was in astonishing form in the preceding T20I series. However, the England wicket-keeper failed to replicate his brilliance in the last ODI where he was dismissed after scoring just one run. Adam Zampa accounted for his wicket, and the leg-spinner will not mind getting better of Buttler once more. Hence, the maverick must be prepared as Finch will definitely throw the ball to Zampa when he comes onto bat.

Unlike the whole season, rain hasn’t played a part in the Australia vs England series and fortunately, weather in the next game is expected to be cricket friendly too. Hence, fans must brace themselves to witness an exciting game of cricket.

(The above story first appeared on LatestLY on Sep 12, 2020 03:20 PM IST. For more news and updates on politics, world, sports, entertainment and lifestyle, log on to our website latestly.com).