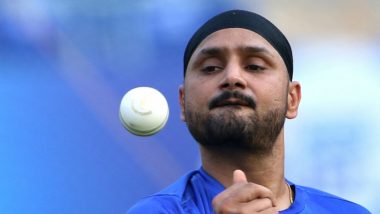 We are heading towards the ICC Cricket World Cup 2019 (CWC 2019) and former cricketers and experts are out with their predictions. Meanwhile, Chennai Super Kings (CSK) spinner Harbhajan Singh has made prediction regarding the upcoming World Cup. Harbhajan reckons India, Australia, England and New Zealand will make it to the last four of the World Cup. ICC Cricket World Cup: Here’s a Look at Some Records and Stats Ahead of CWC 2019.

The veteran spinner has left out teams like Pakistan and South Africa, who others believe can make it to last four. “I am not saying they can’t but New Zealand is a team that does well in big events. Best part of that set up is their boys do the basics well on a consistent basis. That makes a huge difference in a big event,” Harbhajan Singh was quoted as saying by PTI. ICC Cricket World Cup 2019: Meet the Winners Who Won the Coveted Trophy.

The ICC Cricket World Cup 2019 begins on May 30 with hosts England taking on South Africa in the opening match. The 2019 Cricket World Cup will be played in the round-robin format with teams facing each other once. Top four teams will qualify for the semi-finals.

Meanwhile, ICC has announced the prize money for the winner. Team lifting the World Cup trophy will receive the four million dollars while runners-up will get assured two million dollars.

(The above story first appeared on LatestLY on May 18, 2019 05:14 PM IST. For more news and updates on politics, world, sports, entertainment and lifestyle, log on to our website latestly.com).