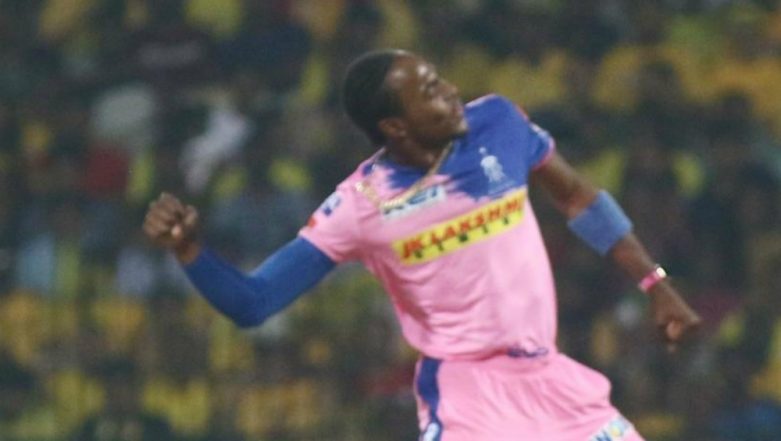 London, May 8: Former skipper Andrew Flintoff believes that England should include all-rounder Jofra Archer at any cost in the 15-member squad for the World Cup beginning at the end of this month. Archer, who is not in the preliminary World Cup squad, impressed in his first two England appearances as he took three wickets and constantly bowled in excess of 90 mph.

The 24-year-old can force his way into the 15 for the showpiece event if he manages to perform well during the five-match ODI series against Pakistan. "He's got to be in," Flintoff was quoted as saying by BBC. "Who I would get rid of? Anyone. He's brilliant," he added. England Team for ICC World Cup 2019: Jofra Archer Left Out of Provisional 15-Man Squad Led by Eoin Morgan.

In his T20I debut against Pakistan on Sunday, Archer returned with the figures of 2-29 and pulled off a run-out as England won the match by seven wickets. "He is unbelievable -- I was watching him bowl the other day and I found it so frustrating that a bloke can bowl so fast with what looks like so little effort," Flintoff said heaping praise on the bowler. The former captain also believes Archer's inclusion would not disrupt the harmony in the England camp.

Comparing the situation with the decision to call up Kevin Pietersen to the 2005 Ashes squad over Graham Thorpe, Flintoff said, "That wasn't popular with everyone because Thorpey had come back in the side and scored a hundred against South Africa, but Kev showed the way to take them on. Archer has that same ability to surprise people, to lead the way and raise the bar.

"Team spirit is born out of winning, I played in a lot of sides, and the only ones that had team spirit were the successful ones. Parachuting someone in is not the issue," he added. England will play two warm-up games against Australia and Afghanistan in two warm-up matches before starting their World Cup campaign against South Africa on May 30 at The Oval.