England’s 2021 tour of India finally comes to the last leg, the ODIs. All three games in the series take place at the Maharashtra Cricket Association Stadium in Pune, starting from March 23 (Tuesday). Having clinched the Test and T20I series comprehensively, Team India must be cloud nine and would like to continue with their winning momentum. 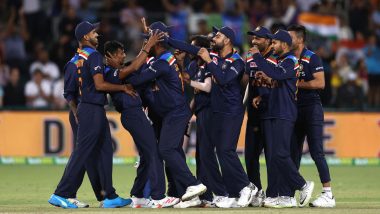 England’s 2021 tour of India finally comes to the last leg, the ODIs. All three games in the series take place at the Maharashtra Cricket Association Stadium in Pune, starting from March 23 (Tuesday). Having clinched the Test and T20I series comprehensively, Team India must be cloud nine and would like to continue with their winning momentum. However, they are up against the top-ranked ODI team can’t afford to be complacent. With several new additions to the team, picking a formidable playing XI would be Team India’s first challenge. As the opening ODI takes a countdown, let’s look at India’s possible playing XI. India vs England 1st ODI 2021 Preview: Likely Playing XIs, Key Battles, Head to Head and Other Things You Need to Know About IND vs ENG Cricket Match in Pune.

Openers: Indian vice-captain Rohit Sharma impressed in the Test and T20I series, and there’s no reason why he should be left out. However, picking his partner would be tricky. Shikhar Dhawan has been accompanying Rohit at the top over the years, and his ODI record is also sensational. However, the team management might be tempted to choose KL Rahul over Dhawan with Rishabh Pant taking the gloves. Notably, Shubman Gill is also in the squad and but isn’t likely to get a chance. England Likely Playing XI for 1st ODI vs India: Probable England Cricket Team Line-Up for First Match in Pune.

Middle-Order: Skipper Virat Kohli was in red-hot form in the T20I series, and the England bowlers would vary him. He will continue to serve at number three with in-form Shreyas Iyer following him. Iyer seemed to have brought an end to India’s quest for a number four batsman, and the England series gives him another chance to stamp his authority.

Wicket-keeper: KL Rahul has kept wickets for India in limited-overs cricket since last year. However, Rishabh Pant is all but likely to take over the gloves for him. The dashing southpaw has shown massive improvement in his batting and keeping lately, and excluding him from the playing XI wouldn’t be wise.

All-Rounders: The Pandya brothers would be the all-rounders in the opening ODI. Hardik bowled brilliantly in the T20I series, and his big-hitting prowess makes him one of the key players in the team. On the other hand, the elder Pandya, Krunal, is expected to make his ODI debut in the first game following a fantastic Vijay Hazare Trophy season. The southpaw is a like-to-like replacement for Ravindra Jadeja and has a great chance to prove his mettle at the highest level.

Bowlers: With Krunal in the team, either Kuldeep Yadav or Yuzvendra Chahal will play in the first ODI. The latter had a forgettable T20I series where he even got dropped in the last two games. On the other hand, Yadav also hasn’t been in great form lately. However, both Kuldeep and Chahal boast a magnificent ODI record and selecting one of them would be a challenge for the team management.

Pacers will fill the remaining three slots. Bhuvneshwar Kumar was at his lethal best in the T20I series and is set to lead the pace attack. Left-arm fast bowler T Natarajan is also likely to get selected due to his variety and bucket of variations. It would be a toss-up between Prasidh Krishna and Shardul Thakur for the last slot. The latter impressed one and all in England T20Is and is likely to get a nod ahead of the to-be-debutant Krishna.

(The above story first appeared on LatestLY on Mar 22, 2021 02:18 PM IST. For more news and updates on politics, world, sports, entertainment and lifestyle, log on to our website latestly.com).