Praising the pace trio of Ishant Sharma, Umesh Yadav and Mohammed Shami, noted commentator Harsha Bhogle tweeted statistics to point out that Indian fast bowlers have been more successful than the spinners in recent times, garnering 239 retweets and 3K likes. 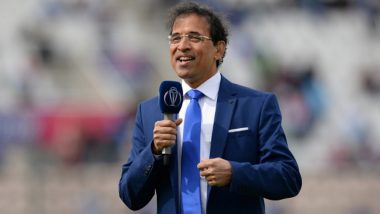 New Delhi, November 24: Led by their pace trio and a captain's knock by Virat Kohli, India crushed Bangladesh by an innings and 46 runs in their maiden pink ball Test at the iconic Eden Gardens in Kolkata to complete a 2-0 series whitewash on Sunday.

On his Twitter handle @bhogleharsha, Bhogle wrote: "Four years ago, against South Africa, India's spinners took 61 wickets to 9 for the quicks. In this series, spin got but 5 (none in this Test) vs 33 to pace. The times, they are a changin'!"

Four years ago, against South Africa, India's spinners took 61 wickets to 9 for the quicks. In this series, spin got but 5 (none in this test) vs 33 to pace. The times, they are a changin'!

In reply, a fan remarked: "This really shows how good our pace attack is. Really looking forward to the tour of New Zealand and Australia. With @Jaspritbumrah93 back, our pacers are gonna give one hella challenge to them."

Another wrote: "@imVkohli has a big role in this. The day he became Test captain he has been promoting "real" fast bowlers like Umesh, Shami, Aron, Ishant, Bumrah and most recently Saini. Dhoni on the other hand preferred control over pace and attacked mostly with spin."

A Twittter user asked: "Has India ever before in India won a Test match with the pacers taking all wickets and spinners taking no wicket?"

A fan observed: "Yes, and Ishant's (Sharma's) length is a revelation."

Another user posted: "Have to thank Bangladesh for this stat, surely India won't be producing such tracks against Eng, NZ and Aus."

One user had a funny take on the issue, saying: "Aggression going up in the country? Also in politics!!"

"It also shows how the pitches have changed dramatically!" one cricket fan posted.

(The above story first appeared on LatestLY on Nov 24, 2019 05:32 PM IST. For more news and updates on politics, world, sports, entertainment and lifestyle, log on to our website latestly.com).