India vs New Zealand 2nd Test 2021 Preview: Likely Playing XIs, Key Battles, Head to Head and Other Things You Need To Know About IND vs NZ Cricket Match in Mumbai

With Kohli set to return, India will have to drop either Ajinkya Rahane or Mayank Agarwal. If the latter is dropped then Cheteshwar Pujara will be asked to open the innings. Mohammed Siraj might also get a place in the Indian playing xi in place of Umesh Yadav. 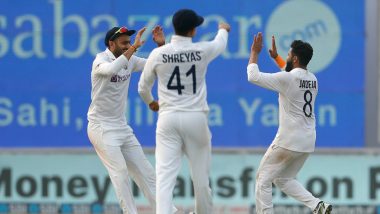 After an epic draw in Kanpur India and New Zealand face-off in the second Test at Mumbai. The contest becomes 'winner takes it all' after the drawn Kanpur Test. New Zealand held-on on day five to secure a draw with needing one wicket for victory. India will now be looking win the final Test and series. Hosts will be boosted by the return of regular captain Virat Kohli. Meanwhile, ahead of the IND vs NZ second Test we take a look at the head-to-head record, live streaming, key players and mini battles of the match. India vs New Zealand, 2nd Test: Dinesh Karthik Reckons Hosts Dropping Ajinkya Rahane To Include Virat Kohli Would Be ‘No Harm’.

With Kohli set to return, India will have to drop either Ajinkya Rahane or Mayank Agarwal. If the latter is dropped then Cheteshwar Pujara will be asked to open the innings. Mohammed Siraj might also get a game in place of Umesh Yadav.

India and New Zealand have played 61 Tests. India leads the head-to-head record in the longer format with 21 wins while New Zealand have won 13. 27 matches between these two sides have ended in draws.

Tom Latham and Kyle Jamieson will be the key players to watch out for in New Zealand camp. In Indian ranks, all eyes will be on Virat Kohli and Ravi Ashwin. India vs New Zealand, 2nd Test: Wasim Jaffer Has a Hilarious Take on India’s Selection Conundrum! (See Post).

You cannot miss the contest between Kane Williamson and Ravindra Jadeja and other mini-battle that we could witness throughout the match will be Kyle Jamieson vs Virat Kohli.

Wankhede Stadium in Mumbai will host the second Test between India and New Zealand. The venue has hosted 25 Tests and India have emerged victorious in 11 of those. The second Test is scheduled to begin at 09:30 am IST (Indian Standard Time).

Live telecast for India vs New Zealand 2nd Test match will be available on Star Sports channels as Star Network holds the broadcast rights for IND vs NZ 2021 series. The game will be telecast live on various Star Sports channels in multiple languages. Disney+Hotstar will also be live streaming the game online for fans in India. Fans can watch the streaming on the Hotstar app as well as on the website.

(The above story first appeared on LatestLY on Dec 02, 2021 01:59 PM IST. For more news and updates on politics, world, sports, entertainment and lifestyle, log on to our website latestly.com).