The Indian Test vice-captain failed to make a mark in Kanpur, getting dismissed for scores of 35 and 4 in both innings respectively. He has been under a lot of pressure owing to his poor form with the bat. 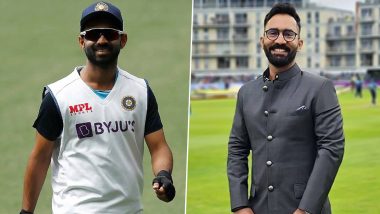 There has already been a lot of speculation doing the rounds about who Indian Test captain Virat Kohli would replace in the side in the second match in Mumbai, which starts on December 3. India were on the verge of securing a 1-0 series lead in Kanpur in the first match but New Zealand's grit coupled with bad light ensured that both sides shared spoils. Coming to the second and final match of the series, both teams would be eager on playing their cards right. Wicketkeeper-batsman Dinesh Karthik has given his take on who should be left out of India's playing XI in the second Test to make room for captain Kohli. India vs New Zealand 1st Test 2021: Sachin Tendulkar Reacts After Thrilling Draw in Kanpur, Writes, ‘This Is What Makes Test Match Cricket Fascinating’ (Check Post)

Karthik reckons that India can consider leaving out Ajinkya Rahane and that would be 'no harm' at all. Rahane has come under fire for a series of poor batting performances and although the management has backed him, he is likely to sit out of the Wankhede Test. The right-hander could manage only 35 and 4 runs in both innings of the Kanpur Test, respectively.

"With Shreyas Iyer coming in and doing so well, I think the pressure will obviously be on Rahane and he might be the one to be dropped. This has happened during a tour of South Africa when Rahane was dropped for a game before he again came back. There is no harm if Rahane's dropped for a game," Karthik, as quoted by Cricbuzz, said.  India vs New Zealand 1st Test, 2021: Head Coach Rahul Dravid Lauds Ravichandran Ashwin After Spinner Achieves Record Milestone in Kanpur (Watch Video)

Many might have thought that Kohli would walk into the side as a replacement for debutant Shreyas Iyer but the Mumbai batsman impressed one and all with a hundred and a fifty in both innings of the first Test. He is set to retain his spot in the team after such wonderful performances. "Iyer has literally taken India to a safe zone in this Test on his own. He's done really well. And it's not like Rahane has not been among the runs in 1-2 Tests. It has been going on for a long time now. I don't think it's such a bad thing for him to be dropped. It will ease some of the pressure on him," he added.

The second Test would begin on December 3 at the Wankhede Stadium. India would be favourites courtesy of their spin-heavy bowling attack but New Zealand proved in Kanpur that they are not like other visitors and that they are in for a fight.

(The above story first appeared on LatestLY on Dec 01, 2021 05:30 PM IST. For more news and updates on politics, world, sports, entertainment and lifestyle, log on to our website latestly.com).