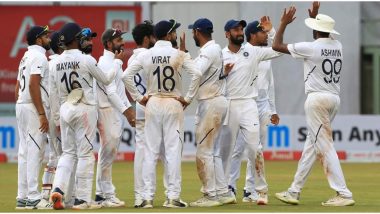 The massive victory by an innings and 137 runs took India’s points tally in the ICC World Test Championship points table to 200 points, 140 more than second-placed New Zealand, who have played two fewer games. India also are the only team to have won all of the four matches they have played in WTC – two in West Indies and two against South Africa. India won the first game at Visakhapatnam by 203 runs before winning the next game by a bigger margin and sealing the series. India vs South Africa 3rd Test Live Scorecard.

For South Africa though, it has only been despite and failures. The Faf du Plessis-led side has also now lost their best performer in the series – Keshav Maharaj – to a shoulder injury, which he sustained in the second Test at Pune. Aiden Markram is another casualty leaving the Proteas to chase a near improbable and consolation victory with a far more inexperienced line-up.

Day 1 of the 3rd India vs South Africa Test match at Ranchi will commence from 09:30 am IST (Indian Standard Time). Both Kohli and Faf du Plessis will walk out for the toss approximately at 08:30 am IST (Indian Standard Time). India have also added off-spinner Shahbaz Nadeem to the squad after Kuldeep Yadav complained of some pain on his bowling hand. Nadeem could be in line to make his India debut, if the hosts decide to play one additional spinner in the slow and turning tracks of Ranchi.

(The above story first appeared on LatestLY on Oct 19, 2019 08:45 AM IST. For more news and updates on politics, world, sports, entertainment and lifestyle, log on to our website latestly.com).