The Men in Blue would be full of confidence after beating world champions Australia in a recently concluded three-,match T20I series. Now they would aim to repeat the same result against South Africa, who are also one of the strongest sides in the format with some exciting players in their line-up. 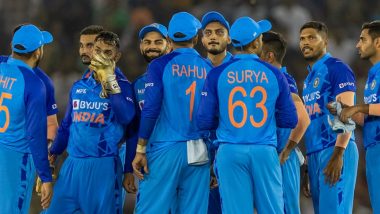 After beating Australia, India would be riding high on confidence as they enter the T20Is against South Africa, that starts from September 28. Beating the reigning world champions in the shortest format, India woukd be brimming with confidence as they face one of the most exciting and resilient teams in world cricket. South Africa had put up a tough fight the last time they had toured India earlier this year. The five-match series had ended 2-2 back then. This time however, India would have the services of some of their most experienced players, in the form of skipper Rohit Sharma, Virat Kohli and also KL Rahul.  Shreyas Iyer, Shahbaz Ahmed Replace Hardik Pandya and Deepak Hooda For India vs South Africa T20Is 2022

The India vs South Africa T20I series would be followed by both these teams meeting in three ODIs, prior to the World Cup. India have the momentum and confidence after defeating Australia in a hotly-contested series while South Africa have not played T20 cricket recently. While the balance is tilted in favour of India, also with the home advantage in play, South Africa cannot be taken easily.

Where To Watch Vitality T20 Blast 2022 Live Telecast On TV?

(The above story first appeared on LatestLY on Sep 26, 2022 09:20 PM IST. For more news and updates on politics, world, sports, entertainment and lifestyle, log on to our website latestly.com).