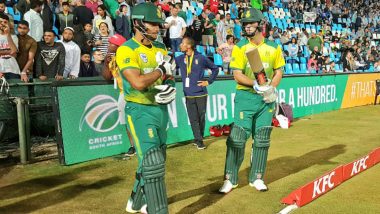 Riding high on half-centuries scored by Pandey and Dhoni, the Indian team cruised to a total which seemed to be above-par for the South African side. Pandey played a scintillating inning of 79 runs off 48 balls, whereas Dhoni scored 52 runs off only 28 balls. The duo ensured that India added 100 runs in the last 10 overs. It was a treat to eyes to see the ‘Vintage Mahi’ return, as she scored 17 runs in the last over.

Earlier, India was off to a shaky start with Shikhar Dhawan adjudged LBW on the first ball of the innings. However, Dhawan was quick to review the decision and he survived. After the first over being a maiden, Rohit Sharma was wrapped LBW on the first ball of the second over. Suresh Raina joined Dhawan in the middle and the duo added 44 runs in only 4 overs to pull India out of trouble.

In the second innings, the South Africans began steadily but then lost their way soon after. Openers Reeza Hendricks and Jon Smuts took time to settle, but could not capitalize on their starts; they were dismissed by Jaydev Unadkat and Shardul Thakur respectively.

It was when Heinrich Klassen and JP Duminy joined forces in the middle it seemed again that the Proteas side might be just able to pass through the middle overs. With the threat of rain looming large at Centurion, the South African side was extraordinarily aggressive in their approach, especially Klaasen. The wicket-keeper batsmen single-handedly took the game away from India as he scored a blistering knock of 69 runs off only 30 balls. On the other end, Duminy provided an anchor support and played until the end, to see his side home ride safely to victory.  Duminy scored 64 runs off 40 balls and Farhaan Behardien was unbeaten on 16 runs off 10 balls.

For India, none of the bowlers - Jaydev Undakat Shardul Thakur, Hardik Pandya, or Bhuvenshwar Kumar - were able to bowl well today. Spinner Yuzvendra Chahal had an off day today as he leaked 64 runs off his 4 overs.

The performance was disappointing from the Men in Blue as at midway in the match, it was their game for the taking. However, with constant rain interruptions and both, Klaasen and Duminy slamming the Indian bowlers out of the park, India was pushed out of the game.

India and South will again meet in the third and the final T20I match of the series at Newlands Cricket Ground, at Capetown. It will be an interesting contest as if India wins series-decider, it will be a rare feat for an Indian side to win two series on foreign soil.

(The above story first appeared on LatestLY on Feb 22, 2018 01:01 AM IST. For more news and updates on politics, world, sports, entertainment and lifestyle, log on to our website latestly.com).