India vs Sri Lanka, 2nd T20I 2020, Key Players: Jasprit Bumrah, Kusal Perera, Shikhar Dhawan and Other Cricketers to Watch Out for in Indore 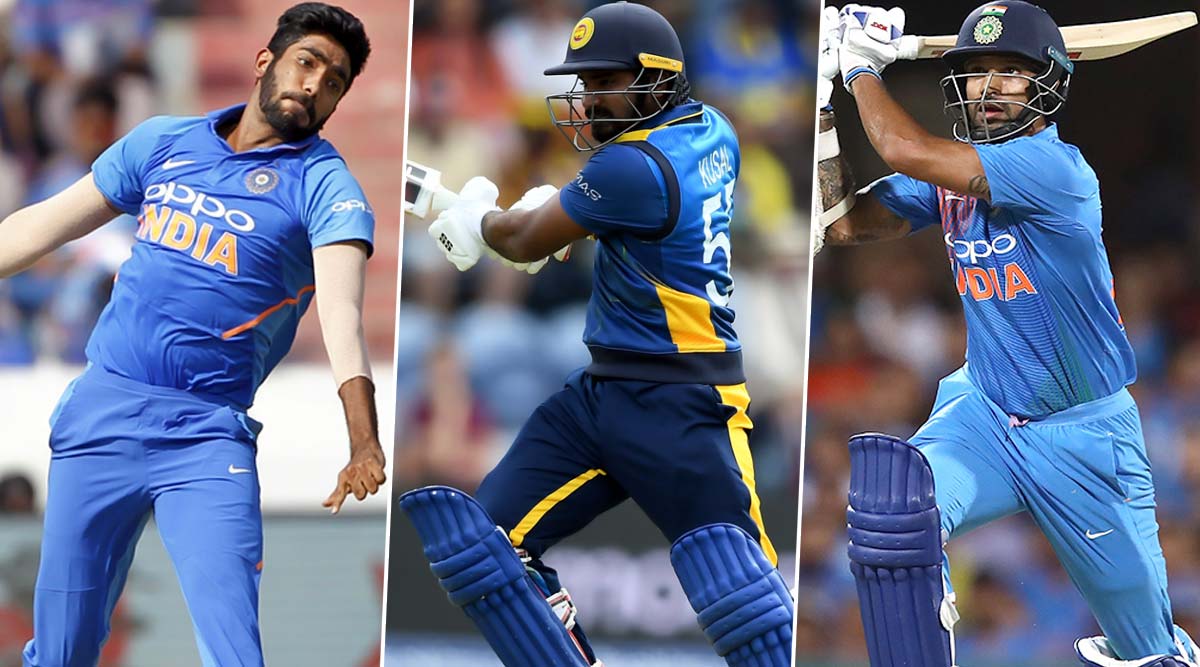 India and Sri Lanka are set to face off in the virtual series opener after the first clash got washed out. The second of the three-match T20I series will be played on January 7 at the Holkar Cricket Stadium in Indore. The Men in Blue have been dominant in the ongoing home season and are expected to continue their great run against their neighbours too. On the other hand, the Lankan Lions had an unforgettable outing in their last series against Australia and will have to put up a colossal performance in order to defeat India at their fortress. India Vs Sri Lanka, Cricket Score 2nd T20I Match.

Many eyes will be on Shikhar Dhawan and Jasprit Bumrah will be making a comeback after recovering from their respective injuries. Other than them, the likes of KL Rahul and skipper Virat Kohli were in great touch in the series against West Indies and will seek to extend their purple patch. For Sri Lanka, veterans like Lasith Malinga and Kusal Perera need to step up in order to upset the Indians. Meanwhile, let's look at some key players who can come good in the forthcoming game.  India vs Sri Lanka 2nd T20I 2020: IND Predicted Playing XI; All Eyes on Jasprit Bumrah As Hosts Set to Retain Side.

Another Indian who's making a comeback after an injury is Jasprit Bumrah. The right-arm pacer played his last international match back in September 2019 and will look to make a roaring comeback. Be it yorkers, slower balls or bouncers, the speedster has all the variations which are required to excel in the shortest format. Thus, the visitors must vary him.

A lot will be in stakes for the dashing southpaw when he'll come out to bat in the 2nd T20I. Dhawan is making a comeback after recovering from a knee injury and will have to prove his mettle in order to remain India's first-choice opener in T20Is. Nevertheless, the left-handed batsman has a good record against the Lankan Lions and will eye to pile up a significant score in Indore.

Sri Lanka’s victory in the forthcoming game is certainly not on the cards. However, tables can turn around if the Lankan wicket-keeper will perform to his potential. The southpaw can certainly attack the bowlers from the outset and no boundaries are big if he gets going. Nevertheless, smashing the likes of Kuldeep Yadav and Jasprit Bumrah will not be a bread and butter task and hence, the left-handed batsman needs to be at his prime.

With 170 wickets in the Indian Premier League (IPL), Sri Lankan skipper Lasith Malinga is very aware of the Indian conditions and will use all his experience to pierce the defences of Virat Kohli and Co. The right-arm pacer might be in the twilight of his career but still hasn’t lost his sheen and taking him lightly could cost the hosts.

The leg-spinner has already showcased his capabilities in his 12-T20I old career and will be seeking to come good against the Men in Blue too. Hasaranga can make the ball turn and his variations can certainly give many batsmen a run for their money. However, containing the likes of Virat Kohli and Rishabh Pant will not be easy and let’s see if the leggie can spin his web or will be smashed to all the parts of the park.

The significance of the ongoing series is even greater than just the victory as the ICC T20 World Cup 2020 is less than a year away and all the sides must be eyeing to identify their best XI in order to step into the gala tournament with a full-strength squad. Well, India’s preparations are certainly looking apt as they defeated West Indies 2-1 in their T20I series and are expected to win this series. However, cricket is a game of uncertainty and thus, chances of Sri Lanka’s triumph must not be ruled out.