India's Lowest Totals In T20I Cricket: As IND Manage 81/8 Against Sri Lanka, Take a Look at Their Top 3 Lowest Scores in Shorter Format of the Game

India have had some really low totals in T20I cricket and they would be relieved that today's shambolic batting performance was good enough to help them not post their lowest ever total in the shortest version of the game. 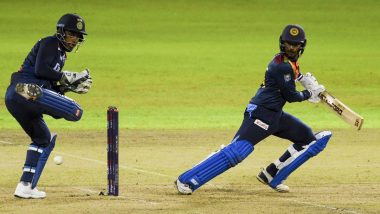 India registered their third-lowest score in T20Is as they were restricted to just 81/8 in their 20 overs by Sri Lanka in the third and deciding fixture of the three-match series. Indian captain Shikhar Dhawan won the toss and opted to bat first. But he along with his batsmen didn't justify the decision at all with them losing wickets in heaps. They were 36/5 at the end of the eighth over. However, this isn't the first time that India are faced with such a situation. They have earlier some really low scores in T20Is owing to poor batting performances.

However, this is after a long time that India even failed to cross the 100-run mark in T20I cricket. Here is a list of their lowest totals in the shortest format of the game: IND vs SL 3rd T20I 2021 Toss Report & Playing XI Update: India Elect To Bat First As Sandeep Warrier Makes T20I Debut

(The above story first appeared on LatestLY on Jul 29, 2021 09:53 PM IST. For more news and updates on politics, world, sports, entertainment and lifestyle, log on to our website latestly.com).