IPL 2019: There Is More to Delhi Capitals Success Than Just Their Name Change 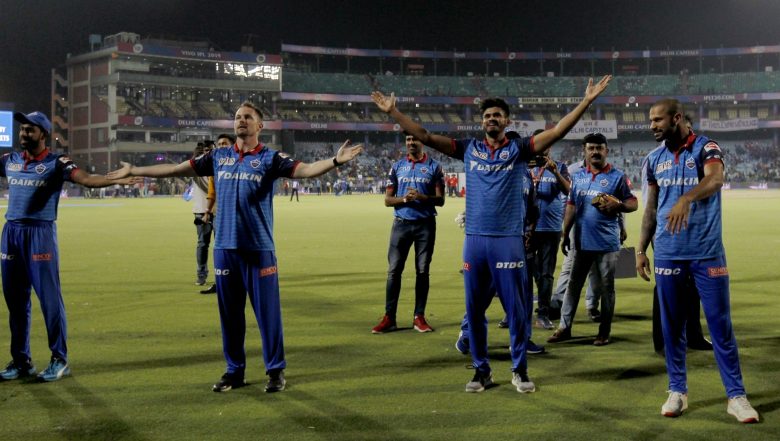 New Delhi, May 7: With a new name and a young captain, Delhi Capitals would have hoped to improve their performance and leave a noteworthy impression in the 2019 edition of the Indian Premier League (IPL). And guess what, the Delhi-based franchise has been able to accomplish the goal. A place in the playoffs after six years is no mean feat and the title would now be the cherry on the cake.  Delhi Capitals vs Sunrisers Hyderabad Live Cricket Score Eliminator T20 Match.

Apart from the first two season of the IPL, Delhi Daredevils had failed to do anything that would justify their name. In fact, the side which has never reached the final, last found a place in the last four in 2012. But all that has changed this season as they finished the group stages with 18 points and are set to play Sunrisers Hyderabad in the Eliminator on Wednesday.

So, what is it that has clicked for the Delhi-based franchise in the 12th edition? We take a look at some of the reasons behind their success in the cash-rich league this year:

One of the problems that Delhi had always faced in earlier editions was the performance of their batters. The side's batting performance always revolved around one big name. If it was Kevin Pietersen in a few seasons, Virender Sehwag did the job in a few others. Not to forget the contributions of Gautam Gambhir and David Warner through the years. But then, once their wicket fell, the scorecard would cut a sorry figure. Indian Premier League 2019 – Points Table.

However, this season the story has been completely different. In Shikhar Dhawan, they got a star who not only brought his experience at the top, but also the aggressive style that gave the DC unit good starts at the top of the innings. Dhawan, who came into the side from Sunrisers Hyderabad, didn't leave his home fans disappointed as he mustered 486 runs in 14 innings. The experienced campaigner not only led from the front but instilled confidence in his young opening partner Prithvi Shaw, who complemented Dhawan's aggressive style of batting.

In Shreyas Iyer, the team had a cool and calm captain who led by example with the bat. With 442 runs, Iyer gave the much needed support to Dhawan. Young wicketkeeper-batsman Rishabh Pant also played some handy cameos at crucial junctures and won matches single-handedly.

The Delhi batsmen played fearless cricket throughout the tournament and the result was there for all to witness.

Delhi Capitals had the fortune of having Kagiso Rabada in their ranks and even though he missed the last two group games and has already left for South Africa due to a bad back, he still stands as the highest wicket-taker in this edition. The Proteas pacer, having the ability to bowl constantly at 145 kmph was on fire in this edition and finished with 25 wickets from the 12 games.

Rabada was well supported by the likes of Ishant Sharma, Amit Mishra, Sandeep Lamichhane and Keemo Paul who maintained the pressure on the opposition from the other end. All in all, it was a combined effort from the bowlers as they performed in unison.

In fact, Ishant -- who leads the Indian bowling attack in Test cricket -- has been highly economical this season. The lanky pacer who has been guilty of leaking plenty of runs in the past, has had an economy rate of around 7.5 this season. Delhi Capitals Look to Prove a Point in Eliminator Against SRH.

The young Delhi brigade has been fortunate enough to be mentored by legends like Sourav Ganguly and Ricky Ponting. The duo have been able to inspire and instill confidence in their young guns. Both Ganguly and Ponting have been able to pass on their aggressive nature and the never-say-die attitude to the players and as a result, the team is now on the cusp of making history as they look to win their maiden title.