IPL 2022: RCB Coach Sanjay Bangar Effusive in His Praise of Rajat Patidar After Win Over SRH

Royal Challengers Bangalore (RCB) head coach Sanjay Bangar has been effusive in his praise for 28-year-old top-order batter Rajat Patidar, ever since he forged a fine partnership with skipper Faf du Plessis after Virat Kohli went for a first-ball duck against Sunrisers Hyderabad on May 8. 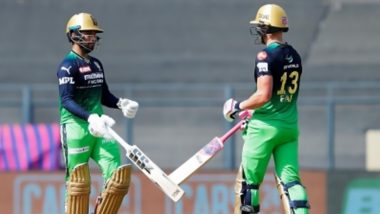 Mumbai, May 10: Royal Challengers Bangalore (RCB) head coach Sanjay Bangar has been effusive in his praise for 28-year-old top-order batter Rajat Patidar, ever since he forged a fine partnership with skipper Faf du Plessis after Virat Kohli went for a first-ball duck against Sunrisers Hyderabad on May 8. At the Wankhede Stadium, thanks to Patidar's 48 and du Plessis' unbeaten 73, RCB scored their second successive win after a series of defeats to put their IPL 2022 campaign back on track. IPL 2022: Rishabh Pant Should Bat in ‘Andre Russell Mode’, Suggests Ravi Shastri.

Bangar said the emphatic 67-run win against SRH -- their seventh in IPL 2022 which helped them climb to fourth place on the points table -- had brought the smiles back in the camp. "We did it on the back of the CSK win. This was pretty special in terms of what we liked about the CSK game was that everybody contributed. The confidence about the game was similar. The message was clear: go out and play well. The conditions were not easy for the batters but credit to all the batters who went there and did a job for us. From that perspective, I feel that we put up a good score on the board," said Bangar.

On Patidar, the head coach said, "For Rajat, we always had confidence in his abilities. In fact, he is the one who would take the pressure off in the first six overs. In the first two overs, we would really feel the pressure after losing Virat to the first ball of the match. But the way they (Patidar and du Plessis) handled that, at one point even 43 for the loss of one wicket seemed like a very, very good achievement at that point in time." Bangar then talked about the transition in the gears. "They went from strength to strength and that laid the foundation for the other batters who come in and play the way they did," he said.  IPL 2022: DC Need to Execute Plans Consistently, Feels Assistant Coach Shane Watson.

He also shed light on the wicket. "The wicket slowed down and the ball also got softer. The more the batter stays there and when he bats for 35-40 balls, he also gets tired. The infusion of DK was important because he was fresh. He could take on the bowlers. At one point we were even considering whether can we ask Faf to come back because he was really cooked at that point. But I think, all the three partnerships that he (du Plessis) managed to get in were critical enough to get us to 193," said Bangar.

(The above story first appeared on LatestLY on May 10, 2022 06:30 PM IST. For more news and updates on politics, world, sports, entertainment and lifestyle, log on to our website latestly.com).