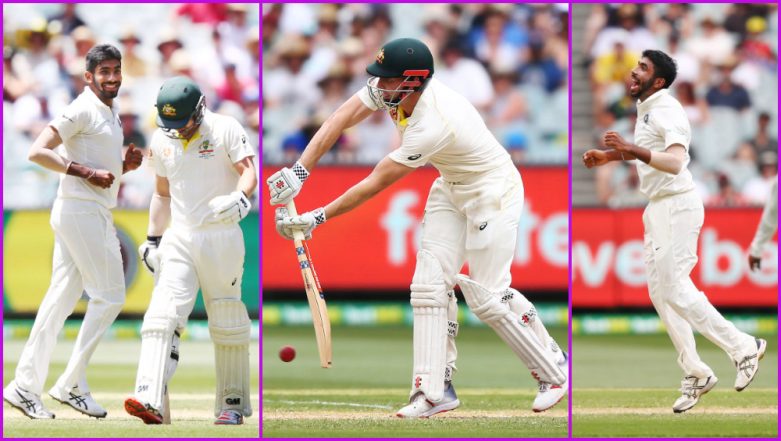 Jasprit Bumrah removed Marsh and Head before and after the lunch break on day three. (Photo: Getty Images)

Jasprit Bumrah dished out some scintillating fast bowling during the day three of the third Test between Australia and India at the Melbourne Cricket Ground (MCG). Bumrah not only used his pace to disguise Australian batsmen but mixed up his variations to push hosts on the back-foot. At the tea break, Australia are reeling at 145/7 and need 99 more runs to avoid a follow-on situation. Ind vs Aus 3rd Test Live Score Updates.

Out of these seven wickets, Bumrah accounted for three. Apart from removing Australian opener Marcus Harris, the pacer claimed wickets of Shaun Marsh and Travis Head. While Marsh was trapped in front of the wickets, Head was bowled by Bumrah.

On the last ball before the lunch break, Bumrah dished out a slower yorker to catch Marsh off-guard. Bumrah, who was bowling at quite a pace, outfoxed Marsh with a slower delivery which landed directly on batsman’s feet. Marsh was adjudged lbw and he didn’t feel the need to review the decision. And rightly so! Mitchell Starc Abuses Rishabh Pant During India vs Australia 2018, Day 2 at MCG (Watch Video)

NOOOOO! @shaunmarsh9 departs on the last before ball before lunch.

Apart from Bumrah, spinner Ravindra Jadeja picked two wickets while Ishant Sharma and Mohammed Shami chipped in with a wicket each. It was Ishant who provided his side with the first breakthrough when he removed Aaron Finch. Jadeja’s two wickets included Usman Khawaja and Mitchell Marsh. Shami towards the end of the second session bowled Pat Cummins to further dent the home side.