Kane Williamson Birthday Special: 176 vs South Africa and Other Marvellous Knocks by the New Zealand Captain in Test Cricket

Kane Williamson, who turns 30 on August 5, 2020, is technically sound and his numbers are nothing short of marvellous. Be it the rank turner of Feroz Shah Kotla or the green track of Lord’s, Williamson has proved his mettle in all the parts of the world. Though his record is sensational in all the formats, it’s the Test arena where he is the biggest nemesis of the bowlers. 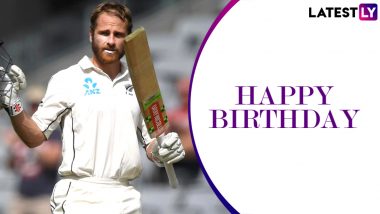 Arguably the best batsman to have ever donned the New Zealand jersey, Kane Williamson celebrates his 30th birthday on Saturday (August 8, 2020). Hailing from Tauranga, the Kiwi skipper is technically sound and his numbers are nothing short of marvellous. Be it the rank turner of Feroz Shah Kotla or the green track of Lord’s, Williamson has proved his mettle in all the parts of the world. Though his record is sensational in all the formats, it’s the Test arena where the Black Caps captain is the biggest nemesis of the bowlers. Williamson has a knack of playing marathon knocks which makes him a dream wicket for many bowlers around the world. Below, we’ll revisit some of his best knocks in Test cricket. IPL 2020 Update: Kane Williamson Excited to Play Indian Premier League This Year, but Waiting for More Clarity.

Making his Test debut in 2010, Williamson burst onto the scenes with a sensational century against India at their own backyard. There was no looking back for the Kiwi star after that as he played one staggering knock after another and became a household name among cricket fans. Composure has been Williamson’s biggest strength as the right-handed batsman has delivered under the crunchiest of situations. So far, the talismanic batsman has scored 6476 runs in 80 Test matches which includes 21 centuries. As the Kiwi star turns a year older, let’s look back at five times when he nightmare to the bowling line-ups. Kane Williamson Opens Up On His Friendship With Virat Kohli, Says ‘It’s Been Interesting.’

131 vs India In Ahmedabad

As mentioned above, Williamson played a gem of a knock on his Test debut. It was the first Test of New Zealand’s 2010 tour of India and the venue was the Sardar Patel Stadium. In reply of India’s first-innings total of 487 runs, Williamson came out to bat at number six and looked rock solid from the start. Facing the likes of Harbhajan Singh and Pragyan Ojha, the youngster played some stellar shots and registered a memorable ton. The visitors scored 456 runs in the second innings as the match ended in a draw.

161 vs West Indies In Barbados

Kane Williamson toiled the Caribbean bowlers in the third Test of 2014 tour and registered a match-winning ton. After opener Tom Latham got dismissed for a duck in the third innings, the talismanic batsman arrived at the creased and started the repair work. Despite losing wickets from the other end, Williamson didn’t lose his concentration and scored yet another century. Courtesy his unbeaten ton, the visiting team declared at 331/7 and went on to win the game by 53 runs.

242 vs Sri Lanka In Wellington

With a first-innings lead of 135 runs, Sri Lanka were on the verge of registering an emphatic win in the second match of 2015 Test series against New Zealand. However, Williamson played a once-in-a-lifetime knock in the third innings and turned the tables around. The Lankan bowlers looked completely ineffective against the star batsman as Williamson scored his maiden double hundred in Test cricket. Riding on his brilliance, the home team won the match by 193 runs.

166 vs Australia In Perth

Playing against the hostile Australian pacers at their own backyard is one of the last things a batsman would want. However, Williamson brilliantly rose to the occasion in the second Test of New Zealand’s 2015 tour down under. In reply of Australia’s first-innings total of 559 runs, the visitors lost Martin Guptill early. Nevertheless, Williamson came to their rescue and played a stellar innings. The right-handed batsman scored 166 runs as the match ended in a draw.

176 vs South Africa In Hamilton

Another Kane Williamson special was seen in the third Test of South Africa’s 2017 tour of New Zealand. The likes of Morne Morkel and Kagiso Rabada were breathing fire with the ball. However, they couldn’t stop the Kiwi skipper from playing a stupendous knock. Batting at number three, Williamson scored 176 runs as the home team posted 489 runs in the second innings. The encounter, however, was interrupted by rain and resulted in a draw.

The talismanic cricketer will next be seen in action during Indian Premier League (IPL) 2020 in UAE. The 2018-Orange cap winner will have to come good to guide Sunrisers Hyderabad (SRH) to their second title. Well, the star batsman, who played his last match in March, will be raring to take the field again and one can expect him to fire in the marquee event. Happy Birthday Kane Williamson!!

(The above story first appeared on LatestLY on Aug 08, 2020 07:40 AM IST. For more news and updates on politics, world, sports, entertainment and lifestyle, log on to our website latestly.com).