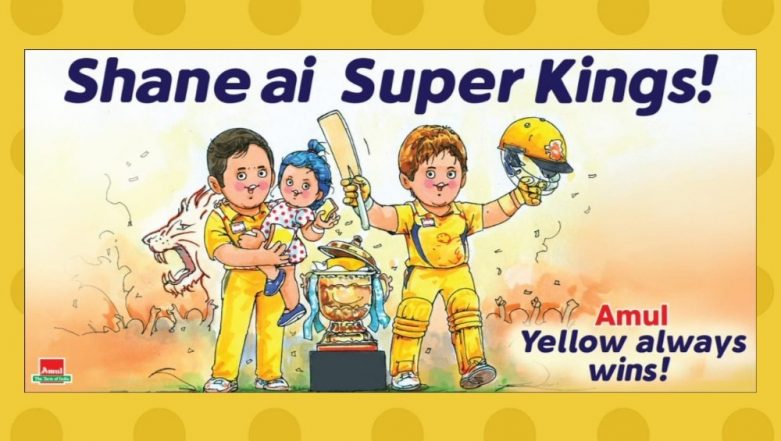 CSK recently won the IPL 2018 by defeating SRH in the final (Photo: @Amul_Coop/Twitter)

Chennai Super Kings (CSK) completed their dream run after returning from two years of absence in the Indian Premier League (IPL) with a title triumph. CSK defeated Sunrisers Hyderabad (SRH) in the final of IPL 2018 to lift their third trophy, equalling Mumbai Indians (MI) record. In the summit clash, played at the Wankhede Stadium in Mumbai, Shane Watson scored unbeaten 117 off just 57 balls to help CSK chase down 179. CSK’s victory became the talk of the town and now Amul has presented its view on the same through their famous topical. No MS Dhoni in Harsh Goenka’s IPL 2018 XI, Fans Show Him Who’s the Boss.

Amul’s latest topical comes with a caption 'Shane ai Super Kings!' and has a tagline which reads, “Yellow Always Wins.” Besides the description, the graphics part has Super Kings captain MS Dhoni carrying his daughter Ziva, portrayed as the Amul girl. Man of the match in the final, Watson too features on it.

Chasing 179, CSK after a shaky start got going thanks to Watson’s brilliance with the bat. During his match-winning knock, the former Australian all-rounder smashed 11 fours and eight sixes. Watson had an impressive outing in the IPL 2018 as he scored 55 runs at an average of 39.64. The right-handed batsman’s unbeaten 117 in the final was his second century of the IPL 2018. Besides it, Watson managed to pick six wickets as well. MS Dhoni Seen Playing With Ziva While CSK Players Celebrate With Trophy, Picture Goes Viral.

Following the victory, Dhoni added one more trophy to his cabinet. He has now won seven T20 tournaments (three IPL, Two CLT20, one World T20 and one Asia Cup T20)– most by any captain.