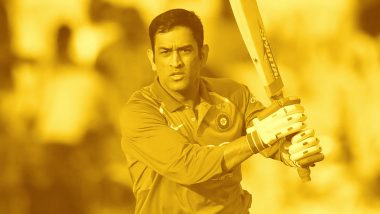 Chennai Super Kings fans were left disappointed after MS Dhoni came to bat in the seventh position with his side chasing 217 runs to win against Rajasthan Royals in IPL 2020. Dhoni had come to bat in a similar position against Mumbai Indians in CSK’s opening Indian Premier League 13 match. Upset CSK fans had then reacted and pleaded with CSK to ask their Thalai to come at the crease in a higher position and guide the team to a good finish. When Dhoni stepped into the crease against RR, CSK needed 103 runs from eight overs to win. That task looks improbable now. Fans reacted with funny memes, jokes and GIFs after seeing their favourite cricketer come so down the batting order. RR vs CSK Live Score Updates IPL 2020.

Dhoni came to bat in the 14th over after Kedar Jadhav was dismissed by Tom Curran. Sam Curran, Ruturaj Gaikwad and Kedar Jadhav had come to bat before Dhoni leaving fans, who waited patiently for the wicketkeeper-batsman, disappointed. CSK needed 103 runs from 6.2 overs when Dhoni stepped into the crease. Did Sakshi Rawat Slam On-Field Umpire After MS Dhoni’s Altercation With Chettithody Shamshuddin During RR vs CSK, IPL 2020?

MS Dhoni to Other CSK Players

Meanwhile their fans thinks dhoni will come to play now

Le dhoni to other player :- pic.twitter.com/sSUVTLMp73

CSK Fans Waiting for MS Dhoni to Come to Bat

CSK fans waiting for dhoni after back to back wickets 😶😶#CSKvsRR pic.twitter.com/etQSnGFrBl

When Will Dhoni Come to Bat?

Dhoni is waiting for the 23rd over.

Dhoni Fans Waiting for Him to Come to Bat

Earlier, some lethal hitting from Sanju Samson and Jofra Archer helped Rajasthan Royals post 216 runs on board. Samson smashed a 19-ball half-century and scored 72 from just 37 balls to give Rajasthan Royals a great start before Archer finished it with four massive sixes off four consecutive deliveries in the final over of the RR’s innings. Captain Steve Smith also scored a half-century for the Royals.

(The above story first appeared on LatestLY on Sep 22, 2020 11:32 PM IST. For more news and updates on politics, world, sports, entertainment and lifestyle, log on to our website latestly.com).