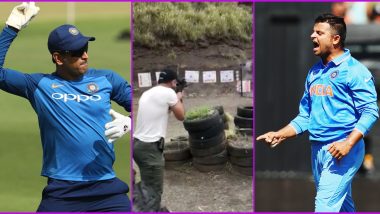 MS Dhoni is known for his cool and calm nature. Rarely we have seen Dhoni get agitated and lose control on the field. The Chennai Super Kings (CSK) is equally cool off the field as well. In an unseen video, shared by Dhoni’s CSK teammate Suresh Raina, the former India captain can be seen target practicing and hitting bullseye almost every time. Rains posted the video on Dhoni’s birthday. The CSK captain as born on July 07, 1981, and turns 39. MS Dhoni Birthday: Rohit Sharma Shares Throwback Picture With ‘Mr Cool’ While Wishing the Former Indian Captain.

Wishes were pouring in for India’s world cup-winning captain as he turns a year older. Not just fans, former and current Indian cricket team players wished Dhoni on his birthday. Dhoni has been trending since morning on Twitter with users of microblogging site posting their wishes for CSK captain. It has been close to a year since Dhoni played any form of competitive cricket. He was all set for comeback during Indian Premier League 2020 but the tournament has been postponed indefinitely, as of now, due to coronavirus pandemic.

(The above story first appeared on LatestLY on Jul 07, 2020 01:47 PM IST. For more news and updates on politics, world, sports, entertainment and lifestyle, log on to our website latestly.com).