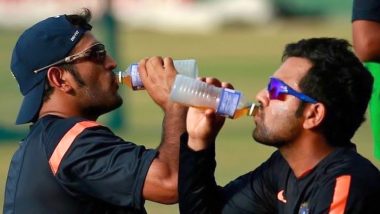 One of the greatest players to have ever stepped onto the cricket field, MS Dhoni turned 39 on Tuesday (July 7, 2020) and birthday greetings are pouring in for him from all over the world. On the occasion, veteran Indian opener Rohit Sharma also took to his official Instagram account and shared a throwback picture with the former Indian captain. In the snap, Rohit and Dhoni can be seen enjoying energy drink during a practice session of the Indian team. “Cooling off with Mr Cool. Happy birthday @mahi7781,” wrote the 33-year-old while sharing the picture on Instagram. MS Dhoni Birthday Messages: Virat Kohli, Virender Sehwag, Kedar Jadhav, Shikhar Dhawan and Others From Cricket Fraternity Wish CSK Captain.

Rohit and Dhoni have played a lot of cricket together and are known to share a great bond too. In fact, it was Dhoni only who asked Rohit to open the innings when the latter was struggling in the middle order. In fact, on many occasions, the two have joined forces on the field and tormented the opposition bowlers. Meanwhile, let’s look at Rohit’s greetings for the former Indian captain. MS Dhoni Birthday Special: Times When Former Indian Captain and His Daughter Ziva Dazzled Social Media.

Apart from Rohit, many other members of the cricket fraternity like Virat Kohli, Suresh Raina and Virender Sehwag also took to social media and greeted the talismanic wicket-keeper batsman. In fact, West Indies and Chennai Super Kings (CSK) all-rounder Dwayne Bravo released his new song ‘Helicopter 7’ as a tribute for the former Indian skipper.

Meanwhile, MS Dhoni's retirement still remains a hot topic of discussion among cricket fans. The wicket-keeper batsman hasn’t played a professional match after the 2019 World Cup. He was set to lead Chennai Super Kings in Indian Premier League (IPL) 2020. However, the T20 tournament also got postponed due to the COVID-19 break and it will be interesting to see when the veteran cricketer will make a comeback.

(The above story first appeared on LatestLY on Jul 07, 2020 01:28 PM IST. For more news and updates on politics, world, sports, entertainment and lifestyle, log on to our website latestly.com).