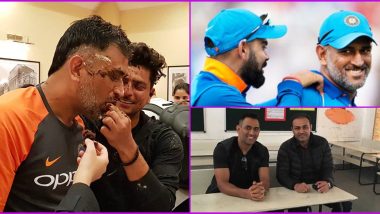 Former India captain MS Dhoni turns 39 today. The wicket-keeper batsman was born on July 07, 1981, in Ranchi. Dhoni made his debut for India in 2004 and cemented his place in the Indian team with a century in One-Day International (ODI) against Pakistan. He was subsequently handed Test and T20I debut as well. Dhoni soon emerged as an important player in the Indian line-up and just three years into his career; he was named captain of ODI and T20I teams. In 2008, Dhoni took over Anil Kumble as Test captain. Under Dhoni, India achieved number one ranking for the first time in Tests, apart from winning 200T World T20, 2011 World Cup and 2013 ICC Champions Trophy. MS Dhoni Birthday Special: Three MSD Captaincy Records Which Will Be Tough to Break for Virat Kohli and Future Indian Skippers.

Meanwhile, as Dhoni celebrates his 39th birthday, the Chennai Super Kings (CSK) captain was one of the trending topics on Twitter. Not just fans, but former and current cricketers wished the world-cup winning Indian captain on his birthday. MS Dhoni Fans Storm Twitter As Former India Captain Celebrates his 39th Birthday.

Sehwag's in his Trademark Style

Once in a generation, a player comes and a nation connects with him, think of him as a member of their family, kuch bahut apna sa lagta hai. Happy Birthday to a man who is the world ( Dhoni-ya ) for his many admirers. #HappyBirthdayDhoni pic.twitter.com/T9Bj7G32BI

Kedar Jadhav Pens Down his Thoughts

Krunal Pandya Chips in as Well

Mahi bhai! Happy birthday to a legend and the coolest guy around 😎 #HappyBirthdayDhoni @msdhoni pic.twitter.com/7gzHcdLWZT

Many more happy returns of the day to a man whose composure and patience continues to be an inspiration. #HappyBirthdayDhoni pic.twitter.com/h1EXP6aohR

Happy birthday Mahi bhai. I hope you have a wonderful and a fantastic day. Thank you for being such an amazing human being. God bless you. ❤️💯 pic.twitter.com/BZ1Za759FM

Once in a lifetime cricketer.

Dhoni is in the twilight of his career, and he last played for India last year in the 2019 World Cup. He was set to make a comeback on the cricket field in the Indian Premier League 2020, but the tournament has been indefinitely postponed amid coronavirus pandemic.

(The above story first appeared on LatestLY on Jul 07, 2020 10:23 AM IST. For more news and updates on politics, world, sports, entertainment and lifestyle, log on to our website latestly.com).