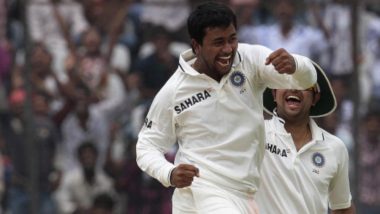 Pragyan Ojha retires from all forms of cricket and he made an announcement of the same on his social media account. The spinner made his Test debut in November 2009 against Sri Lanka and a year before that he played his first ODI in June 2008 against Bangladesh. He made a debut in the format of the game in June 2009 against Bangladesh. The spinner has achieved World no 5 as his career-best ranking in ICC Player Rankings. No sooner he made an announcement today on social media, he Twitterati congratulated the spinner. Sachin Tendulkar Congratulates Pragyan Ojha on Becoming Father, Calls ‘Holding Your Baby for 1st Time As Most Precious Feeling’ (See Tweet).

The spinner put up a tweet and social media in which he thanked his fans and people who motivated him throughout his career. He also put up a long post to go along with the tweet which read that Ojha will be hanging his boots with an immediate effect. In the post, he also thanked the BCCI for giving him the opportunity to play for India. In the note, he further thanked all the state association under whom he played the domestic cricket.  In the second part of the post, he thanked his parents and the media for their constant support. Check it out below:

It’s time I move on to the next phase of my life. The love and support of each and every individual will always remain with me and motivate me all the time 🙏🏼 pic.twitter.com/WoK0WfnCR7

Wish you all the very best Pragyan. See you soon and will fondly remember your efforts for India.

Congratulations on a glittering career, Pragyan! All the best for whatever you take up in the future :)

More than the match winning bowling will fondly remember the Mohali test as VVS Laxman shouting n then u hitting winning runs. 🇮🇳👍

All the very best brother...u have given it best to the team buddy🥰🙏

Pragyan Ojha was recently in the news for becoming a father the first time and Sachin Tendulkar had congratulated him. Also, Ojha did not find any takers for the Indian Premier League 2020. Nonetheless, the entire team of LatestLY.com congratulates the spinner for his prolific career.

(The above story first appeared on LatestLY on Feb 21, 2020 11:59 AM IST. For more news and updates on politics, world, sports, entertainment and lifestyle, log on to our website latestly.com).