Pressure Will Be on England in ODIs, Feels Ireland Coach Graham Ford 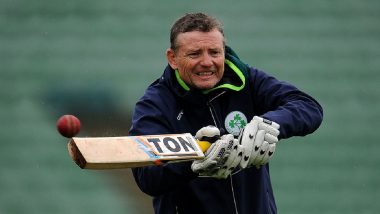 Southampton, July 29: Ireland coach Graham Ford feels the pressure will be on England to not lose against them, and on their day they can give the world champions a fight. Ireland fared well in a Test and ODI last year before England prevailed. "We've shown in the ODI at Malahide and the Test at Lord's that we can give England a fright," he was quoted as saying by BBC.

All three games in the ODI series will be played at the bio-secure Ageas Bowl in Southampton. It will be a young England side led by Eoin Morgan which will take on Ireland with many first team stars like Ben Stokes, Joe Root and Jofra Archer rested after the West Indies Test series. England vs Ireland Dream11 Team Prediction: Tips to Pick Best All-Rounders, Batsmen, Bowlers & Wicket-Keepers for ENG vs IRE 1st ODI 2020.

"We must get the basics right in order to compete -- they would take a lot of flak if they lose and they have the pressure on them," added Ford. "Not having a crowd is definitely not a disadvantage for us and it may calm the nerves of the younger players. It's not strange for us to play with not many people in attendance but for England it could be an issue.

"Yes, there's a bit of rustiness but everyone is highly motivated and energised -- there's a lot of positivity in the squad and I'm pleased overall. "There's a family feel in this Ireland team and that goes a long way to making you competitive."

(The above story first appeared on LatestLY on Jul 29, 2020 05:51 PM IST. For more news and updates on politics, world, sports, entertainment and lifestyle, log on to our website latestly.com).