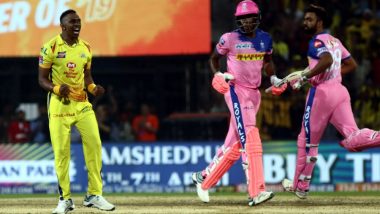 Chennai Super King posted a tweet in Tamil, which we couldn't translate and posted a picture of Rajinikanth with yellow colours overshadowing pink. The last time the two teams met each other in IPL 2020, Rajasthan Royals walked away with the game on both occasions. The first game was won by RR  by 16 runs whereas, in the second match, Rajasthan Royals walked away with the match as they won the game by seven wickets.

Now, let's have a look at the tweet below:

The match will begin at 7.30 pm IST. The two teams have met each other 23 times and the RR has won nine matches. The rest of the games were won by the Yellow Army. Stay tuned to this space for the updates of the game.

(The above story first appeared on LatestLY on Apr 19, 2021 06:00 PM IST. For more news and updates on politics, world, sports, entertainment and lifestyle, log on to our website latestly.com).