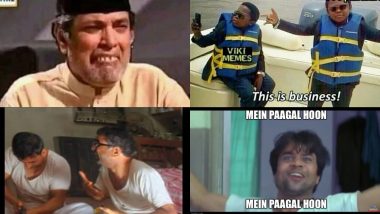 Royal Challengers Bangalore survived a scare to beat Mumbai Indians in a super over after the match ended in a tie. RCB chased down eight runs to clinch the super over and record their second win in IPL 2020 after almost coming on verge of losing the match. RCB failed to defend 201 runs and was on verge losing the clash when Mumbai Indians needed 5 runs off 2 balls to win. But Ishan Kishan was out in the penultimate delivery and Kieron Pollard hit a boundary from the final ball to tie the match. Fans immediately started trending IPL funny memes after another thriller. RCB vs MI Highlights IPL 2020.

RCB failed to defend 201 runs with Ishan Kishan and Kieron Pollard taking 80 runs off the final four overs to tie the match and take the game to a super over. RCB had Mumbai Indians reeling at 78/4 in 11.2 overs chasing 202 to win and the game looked lost for them at that stage. But Pollard and Kishan shared 123-run partnership in just 8.4 overs to help MI tie the game. Pollard smashed a 20-ball half-century while Kishan smashed 99 off 58 with the help of nine sixes and two fours. Pollard remained not-out on 60 from 24 deliveries, which comprised of five maximums and three boundaries. Virat Kohli Funny Memes Go Viral After RCB Captain’s Yet Another Poor Outing, Scores 3 off 11 Balls in RCB vs MI Dream11 IPL 2020.

RCB and Mumbai Indians Fans During Super Over

RCB Fans After Winning Super Over

RCB After Winning the Match

RCB Fans When Match Went Into Super Over

Game gone into super over

RCB Fans After Super Over Win

What have you done RCB? pic.twitter.com/FWZoqCfYyf

I was very nervous for Kohli in the last ball but class is class. Saini an awesome over, totally unexpected!

Earlier, asked to bat first Royal Challengers Bangalore scored 201 runs in 20 overs with Aaron Finch, Devdutt Padikkal and AB de Villiers scoring half-centuries. Finch and Padikkal shared an 81-run opening stand to give RCB a flying start before De Villiers smashed a fifty off only 23 balls to take them past the 200-run mark. Shivam Dube also scored 27 off 10 deliveries with the help of three sixes and helped RCB post a big score.

(The above story first appeared on LatestLY on Sep 29, 2020 12:06 AM IST. For more news and updates on politics, world, sports, entertainment and lifestyle, log on to our website latestly.com).