It sparked controversy when Symonds accused Harbhajan of calling him “monkey.” The Australian all-rounder was supported by few of his Australian teammates who rallied behind him while Harbhajan Singh had Sachin Tendulkar’s support. The racial abuse incident followed by the umpiring blunders led to then Indian captain threatening to take team home without completing the series. 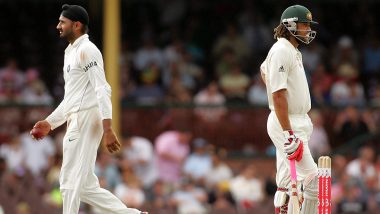 Very few incidents have rocked world cricket as the infamous ‘monkey gate scandal’ which threatened to not only end the bilateral cricketing ties between India and Australia but also changed how cricket was always perceived as gentleman’s game. India’s tour of Australia in 2008 had already turned controversial owing to the several umpiring gaffes that largely benefitted the home side but the ‘monkey gate incident’ changed everything. Harbhajan Singh was accused of racially abusing Andrew Symonds with India even threatening to walk out of the series and return home. Ponting, who was then the Australia captain recently shared his experience about that series and what he thought went wrong for his side in the Test series. Sachin Tendulkar Asks Citizens to Act Responsibly to Keep COVID-19 at Bay (Watch Video).

“Monkeygate was probably the lowest (point in a career as captain). We all felt let down by the end result (of the Monkeygate controversy),” the two-time World Cup-winning captain was quoted as saying in by news agency PTI on Sky Sports podcast. But what hurt the team most was how the incident affected their cricket and affected their result for the next Test, revealed the 45-year-old.

It sparked controversy when Symonds accused Harbhajan of calling him “monkey.” The Australian all-rounder was supported by few of his Australian teammates who rallied behind him while Harbhajan Singh had Sachin Tendulkar’s support. The racial abuse incident followed by the umpiring blunders in the second Test match at Sydney led to then Indian captain threatening to take him, team, back home without completing the series. It was in the same series that Kumble uttered the famous line “only one team played in the true spirits of the game.”

Recalling the incident Ponting said: “Monkeygate was probably the lowest (point in a career as captain). Losing the 2005 Ashes series was tough but I was in full control of that. But I wasn’t in full control of what happened during the Monkeygate thing. We all felt let down by the end result (of the Monkeygate controversy). The fact that it got in the way of the way we played our cricket for the next Test match was probably the most disappointing thing,” added the former Australia captain, who guided the Baggy Greens to 48 wins in 77 Test matches as captain.

Harbhajan Singh was later cleared of the charges and India bounced back the Sydney defeat with a 72-run famous victory at Perth. And Ponting revealed that it was this defeat at Perth that spoke how much that incident had affected the team and also made him realise how he lost control and couldn’t keep things from reaching the players’ minds.

“It was a low point and also because it dragged on for so long. I remember coming off the ground during the Adelaide Test match and speaking to Cricket Australia officials about the case because the hearing was at the end of the Adelaide Test match,” added Ponting. “So we go over there and India at Perth is game we expect to win and then we lost the match and after that, the next few days things just got worse and worse.”

The emergence of the Indian Premier League, however, changed everything and also healed the strained relationship between both India and Australia cricket teams. Harbhajan Singh and Sachin Tendulkar later went on to share the same dressing room at Mumbai Indians with both Ponting and Symonds.

(The above story first appeared on LatestLY on Mar 18, 2020 02:37 PM IST. For more news and updates on politics, world, sports, entertainment and lifestyle, log on to our website latestly.com).