Rajasthan Royals dealt a major blow to their IPL 2021 preparation after Jofra Archer was ruled out of the tournament due to an elbow injury. Archer was named the player of the tournament last year and his absence will have a big impact on the Royals’ performance this season. They signed Chris Morris for Rs 16.25 Crore at the Players auction. 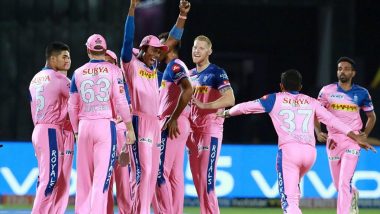 Rajasthan Royals endured their worst ever Indian Premier League (IPL) campaign last year and finished at the bottom of the standings. They managed only six wins in 14 games and ended the tournament with a heavy defeat to Kolkata Knight Riders. In the way IPL 2020 panned out for them, it prompted a big overhaul and the management started by releasing Steve Smith from captaincy duty and then released him from the squad. Sanju Samson has since taken over as the captain and will lead Rajasthan Royals in IPL 2021. The franchise are aiming for their second IPL title and first in 13 years. Rajasthan Royals Team in IPL 2021: Players Bought by RR in Auctions, Check Full Squad of Sanju Samson-Led Team.

The franchise entered the IPL 2021 players auction with one of the biggest purse and made Chris Morris the most expensive overseas player in IPL history after signing him for Rs 16.25 Crore. They also bagged Shivam Dube and Mustafizur Rahman at the auction. But the Royals dealt a major blow to their IPL 2021 preparation after Jofra Archer was ruled out of the tournament due to an elbow injury. Rishabh Pant to Lead Delhi Capitals in IPL 2021: A Lookback at the Wicket-Keeper Batsman's IPL journey As He Makes Captaincy Debut.

Archer was named the player of the tournament last year and his absence will have a big impact on the Royals’ performance this season. But the franchise have able replacements in Mustafizur and Andrew Tye. Ahead of IPL 2021, take a look at the predicted playing XI for Rajasthan Royals.

Openers: Ben Stokes partnered Yashasvi Jaiswal/Robin Uthappa at the top for Rajasthan last year. But Stokes could be pushed back to the middle this season with Jos Buttler retaking his position as an opening batsman. Buttler has proven himself as an opening batsman in T20Is for England as well as for Royals in the past. Jaiswal didn’t get much game time last season and played only three matches. But with the Royals trading Robin Uthappa to Chennai Super Kings, Jaiswal is likely to partner Buttler as the opening combination.

Middle-Order:  Sanju Samson will bat first down for Rajasthan Royals. There is no doubt about Samson’s talent. But he has been inconsistent and often tends to taper off as the tournament progresses. He scored 371 runs last season in 14 games. But more than half of those runs came in the opening three games. He will also have to shoulder the responsibility of captaining the franchise this season.

All-Rounders: Rajasthan Royals have plenty of all-rounders to choose from. But they likely to go with Stokes, Riyan Parag, Rahul Tewatia, Shivam Dube and Chris Morris in that order. Stokes will not be bowling much this year to avoid burnout, Royals technical director Kumar Sangakkara said. Parag will also mainly play as a batting specialist. Tewatia, Dube and Morris will play crucial roles both with the ball and bat.

Bowlers: Shreyas Gopal has been with the Royals for four seasons now since his move from Mumbai Indians and has been Royals’ premier spinner. He is expected to once again lead the spin attack. Shreyas took 10 wickets in14 games last season but Rajasthan Royals will expect him to take more responsibility this season. With Archer ruled out, either of Andre Tye and Mustafizur are likely to get the nod. Young Karthik Tyagi will be the third pacer in the side. The youngster has made massive progress and was also part of the Indian team as a net bowler during their tour of Australia.

(The above story first appeared on LatestLY on Mar 31, 2021 04:09 PM IST. For more news and updates on politics, world, sports, entertainment and lifestyle, log on to our website latestly.com).