Rishabh Pant to Lead Delhi Capitals in IPL 2021: A Look back at the Wicket-Keeper Batsman's IPL journey As He Makes Captaincy Debut

DC had several options in Shikhar Dhawan, Steve Smith, Ajinkya Rahane and Ravi Ashwin, who have led IPL teams before. However, the management showed their trust in the 23-year-old Rishabh Pant, who’ll make his captaincy debut in IPL. Pant has been the cornerstone of the Delhi-based team ever since joining the franchise in 2016. 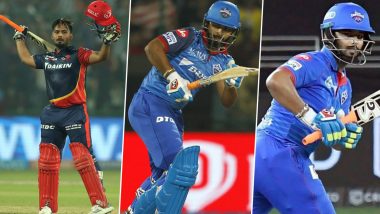 The last few months have indeed been memorable for Rishabh Pant as the young wicket-keeper smashed a flurry of record and cemented his place in the Indian team across all formats. While his batting prowess has tormented many prominent bowlers, his glove-work is getting better with time. However, the southpaw now has a different challenge ahead of him as he has been named Delhi Capitals (DC) captain for VIVO Indian Premier League (IPL) 2021. Regular skipper of the side, Shreyas Iyer will miss the entire season due to a shoulder injury, and Pant has been handed over the leadership role.

Notably, DC had several options in Shikhar Dhawan, Steve Smith, Ajinkya Rahane and Ravi Ashwin, who have led IPL teams before. However, the management showed their trust in the 23-year-old Rishabh Pant, who’ll make his captaincy debut in IPL. Pant has been the cornerstone of the Delhi-based team ever since joining the franchise in 2016. The left-handed batsman kept evolving with time and emerged as a destruction machine for the bowlers. As the young dasher aims to guide DC to the elusive title, let’s look at his journey in IPL. Rishabh Pant Named Delhi Capitals Captain for IPL 2021, Netizens Congratulate the New DC Skipper.

Several jaw-dropping knocks in the 2016 U-19 World Cup earned Pant a contract with Delhi Daredevils (now Delhi Capitals).  DD bought him for INR 1.9 crore in the 2016 auctions. Although the southpaw didn’t burst onto the scenes, he showcased glimpses of his potential. He, in total, scored 198 runs in 10 games with the best score of 69. IPL 2021 Schedule in PDF for Free Download: Get Indian Premier League 14 Venues, Full Time Table, Fixtures and Match Timings in IST.

Pant played IPL 2017 as a capped Indian player, making his T20I debut just a few months before the tournament. The southpaw looked like an entirely different batsman as his fearless approach took many opposition bowlers by storm. In a match against the now-defunct Gujarat Lions, the dasher scored a match-winning 97 off mere 43 balls.  He made some serious noise that season, scored 366 runs in 14 games at a strike rate of over 165.

The dasher unleashed his A-game in IPL 2018, playing one staggering knock after another. Pant wasn’t just scoring quickly but was also posting big scores regularly. Despite not getting much help from the other end, Pant stood as lone warrior of Delhi’s batting line-up that season and even notched up his maiden IPL hundred. He scored 684 runs in 14 games, most for a non-opener in any IPL season. Moreover, his average and strike rate were over 50 and 170 respectively.

Before IPL 2019, the youngster had made his international debut in all three formats and even had two Test hundreds under his belt. Hence, expectations were sky high from him. Notably, the Delhi-based franchise also changed their name from Delhi Daredevils to Delhi Capitals that season and their fortunes changed as well. Under Shreyas Iyer’s leadership, Delhi advanced to the playoffs, and Pant played a vital role. He scored 488 runs in 16 games, with a strike rate over 160.

The expectations of fulfilling MS Dhoni’s big boots had indeed got the better of Pant after the 2019 World Cup. The wicket-keeper faced was affected by the constant criticism, which was evident in his frequent failures. He eventually lost his place in India’s ODI and T20I Playing XI to KL Rahul. The youngster had a chance to redeem themselves in IPL 2020, which took place in UAE. However, he was no way near his best in the tournament, scoring 343 in 14 games at a strike of below 115. His only half-century that season came in the final against Mumbai Indians.

Although it hasn’t been even five months since the IPL 2020’s conclusion, a lot has changed in Pant’s life. As mentioned above, he proved his mettle in all three formats, with one match-winning knock after another. However, can Rishabh Pant pass the captaincy test? He has been an animated character who likes to get involved in the game. Moreover, he has many experienced heads around him who can help him at times. Delhi Capitals will begin their IPL 2021 campaign against MS Dhoni’s Chennai Super Kings on April 10.

(The above story first appeared on LatestLY on Mar 31, 2021 03:55 PM IST. For more news and updates on politics, world, sports, entertainment and lifestyle, log on to our website latestly.com).