Sachin said the summer conditions, which will prevail during the showpiece event, will not help bowlers much and the pitches will behave in a similar way as during the 2017 Champions Trophy in England. 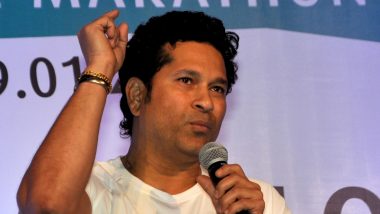 Mumbai, May 2: Batting great Sachin Tendulkar reckons that the wickets in England and Wales, set to host the 2019 Cricket World Cup starting May 30, will assist batsmen and bowlers might struggle to swing the ball. Sachin said the summer conditions, which will prevail during the showpiece event, will not help bowlers much and the pitches will behave in a similar way as during the 2017 Champions Trophy in England. Sachin Tendulkar Wishes Brian Lara on His 50th Birthday, Shares a Picture of The Duo Gorging On Fish.

"I am told it's going to be a hot summer. Even during the Champions Trophy the wickets were superb when the sun was out. In the heat, the wickets get really flat. I am sure they will give beautiful tracks to bat on," the 46-year-old said on the sidelines of the inauguration of the MIG Club pavilion named after him.

"I don't think there will be much difference in the conditions unless there is a heavy cloud cover. If there is a cloud cover, the ball might go around a bit. Even if that's the case, I don't see that happening for a longer duration, may be just in the initial overs," he said.

Sachin also felt as several Indian players, including captain Virat Kohli, M.S. Dhoni, Hardik Pandya and Shikhar Dhawan, are performing well in the ongoing Indian Premier League (IPL), it will help in boosting their confidence for the World Cup.

"A good performance in any format is good news because it gives the player confidence. If you are confident, that's important," he said. Shahid Afridi Gets Trolled After Excluding Sachin Tendulkar & MS Dhoni From His All-Time World Cup XI.

"The players have time to make some adjustments according to the conditions. All of them have played enough cricket to know what to do to improve," Sachin remarked.

(The above story first appeared on LatestLY on May 02, 2019 08:51 PM IST. For more news and updates on politics, world, sports, entertainment and lifestyle, log on to our website latestly.com).