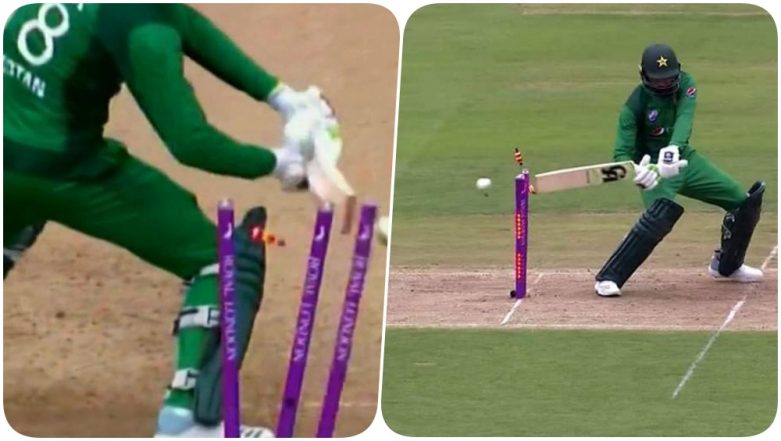 After losing to England in the third ODI despite putting up a big total on the board, team Pakistan stepped on the crease, in the fourth match at the Trent Bridge. After winning the toss, England decided to bowl first. Imam-Ul-Haq made way to the pavilion after getting retired hurt on the score of 6. Fakhar Zaman made 50 runs from 50 balls. Babar Azam was the one who grabbed the headlines for scoring 115 runs from 112 balls. But, Shoaib Malik who was looking extremely good disappointed the fans by getting out on a hit-wicket. Imam-ul-Haq Gives Pakistan an Injury Concern Ahead of ICC Cricket World Cup 2019.

Malik was obviously embarrassed with his dismissal and as he missed a half-century by nine runs. It was in the 47th over that Malik attempted to play a late-cut when Mark Wood was handling the bowling duties. After his dismissal, Malik kept on staring at the stumps as they got rattled in utmost disbelief.  The video was posted by the official account of England Cricket Board on their social media account. Check out the live scores of the match here.

Pakistan finished the inning by scoring 350 runs from 50 overs with the loss of seven wickets. Tom Curran snapped four wickets giving away 75 runs and bowled at an economy of 7.50. Mark Wood got a couple of them and Jofra Archer snapped one wicket. As of now, Jason Roy is batting on the score of 103 runs. The hosts have lost one wicket in the form of James Vince on 43 runs. Joe Root is also batting currently on the score of 29 runs.