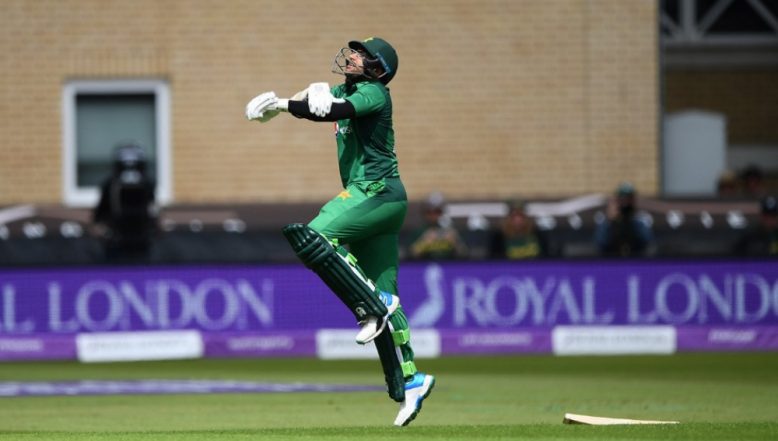 After breaking Kapil Dev's record in the third match against England, Imam- Ul-Haq stepped on to the crease for the fourth ODI. But little did the Pakistani team know that they would have a hiccup ahead of the ICC Cricket World Cup 2019. Batting on number three, a delivery from Mark Wood, hit his elbow as he missed a pull shot. The incident took place in the fourth over at the Trent Bridge Stadium. Right before the World Cup, Imam-Ul-Haq's injury is a major concern for the team especially because of the ICC Cricket World Cup 2019 in the offing.  Imam- Ul-Haq Breaks Kapil Dev's 36-Year-Old Record With His Knock of 151 Runs During England vs Pakistan, 3rd ODI.

The Pakistani batsman was soon off the field and was seen in immense pain and the impact was so hard that the physios approached Imam-Ul-Haq. The team management rushed to the hospital for X-Ray. "Imam injury update Imam taken to hospital for precautionary Xray. A further update will be provided later.#ENGvPAK," read the tweet on the Pakistani team handle.

Imam taken to hospital for precautionary Xray. Further update will be provided later.#ENGvPAK

Here's the picture of Imam walking off the stadium.

#AbidAli helps and walks #ImamulHaq off the field in #EngvsPak

Weird that a player who debuted only when the other was injured, directly competed against him, for same slot, only recently rumoured to be removed from #Worldcup squad cuz has no reference, will now be replacing him pic.twitter.com/LyzrqPHbqY

Imam, fresh from his career-best 151 in the third ODI at Bristol on Tuesday, fell to the ground and winced on the turf in the agony. The 23-year-old nephew of Pakistan great and selection chief Inzamam-ul-Haq then had several minutes' treatment before retiring hurt on three not out, with the tourists then nine without loss. World Cup hosts and tournament favourites England lead this five-match series 2-0. Check out the live score of the match between England and Pakistan over here.