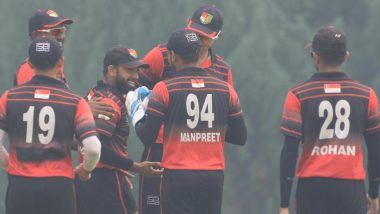 Singapore beat Zimbabwe by 4 runs in a thrilling encounter to register their first victory in the Singapore Tri-Nation Series. Zimbabwe, who beat Nepal in their first game, needed 10 runs in the final over but fell short by 4 runs to eventually suffer their first loss in the tri-series. Sidhant Singh bowled the final over and gave away only 5 runs to lead his side to victory. Zimbabwe skipper Sean Williams continued his fine run in the tournament with another fighting half-century but failed to carry his side home. All three team in the tri-series – Zimbabwe, Nepal and Singapore – now have one win and loss each from their respective two games.

Earlier, opting to bat first, Singapore posted 181/9 runs after the game was shortened to 18 overs due to rain delay. Wicket-keeper Manpreet Singh and Tim David were the joint top-scorer for the hosts with 41 runs. Manpreet innings of 41 came off 23 deliveries with four boundaries and one maximum, while David's score came from one more delivery, which had four maximums and two boundaries. Opening duo Rohan Rangarajan and Surendran Chanramohan set the Singapore innings with a 62-run opening stand before David and Manpreet helped Singapore to a big score.

Ryan Burl was the chief wicket-taker for Zimbabwe with figures of 3/24 in 3 overs. His terrific performance with the ball reduced Singapore from 62 for no wicket to 121/4 at one stage, with Burl taking three of the top-four batsman. Richard Ngarava also chipped in with a two-wicket haul, while Neville Madiza and skipper Williams took one-wicket apiece.

In reply, Zimbabwe were off to a poor start. The visitors lost opening batsman Brian Chari for just 2 runs from 9 deliveries before Regis Chakabva (48) and Williams shared a 40-run partnership to keep their side in the chase. Williams also was involved in a 70-run stand with Tinotenda Mutombodzi (32) to take Zimbabwe closer to victory. But the batsman that followed failed to take the visitors, home.

(The above story first appeared on LatestLY on Sep 29, 2019 11:05 PM IST. For more news and updates on politics, world, sports, entertainment and lifestyle, log on to our website latestly.com).