Sourav Ganguly Wanted to Issue Show Cause Notice to Virat Kohli After his Controversial Press Conference Ahead of India Tour of South Africa 2021-22: Report

These comments made by Kohli in front of the media didn't go down well with the BCCI as it eventually showed both board and Ganguly in poor light. And it is understood that a convinced Ganguly, in what could have been an unprecedented move in the history of Indian cricket, had prepared a draft letter and wanted to send a show-cause notice to Kohli for his outburst. 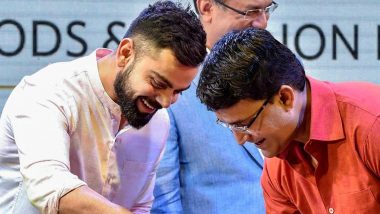 New Delhi, Jan 20 (IANS) In a major revelation in the whole Sourav Ganguly and Virat Kohli saga, it has been now learnt that the BCCI president wanted to issue a show-cause notice to the then India Test captain before the beginning of the series against South Africa in December 2021. Ahead of the Indian team's departure for South Africa, Virat addressed the press conference and made some strong comments. Virat Kohli Press Conference: From ODI Captaincy to Opening Up About the Rift With Rohit Sharma, 5 Important Statements By India’s Test Skipper Ahead of IND vs SA Series 2021-22.

He claimed that no one from the board or the selection committee had asked him to reconsider his decision to give up captaincy in the T20 cricket, contradicting Ganguly, who had said that he personally requested the star batter to not leave the leadership role in the shortest format of the game.

The 33-year-old also complained about the lack of communication between him and the board before removing him as ODI captain.

These comments made by Kohli in front of the media didn't go down well with the BCCI as it eventually showed both board and Ganguly in poor light. And it is understood that a convinced Ganguly, in what could have been an unprecedented move in the history of Indian cricket, had prepared a draft letter and wanted to send a show cause notice to Kohli for his outburst.

The 49-year-old had also discussed the matter with the BCCI members. However, the board eventually didn't find it appropriate to issue a notice to the Test captain days before the Test series in the Rainbow nation.

"And the board president was all for issuing a show-cause notice to Kohli," a source close to the development was quoted as saying by India Ahead News.

Notably, Kohli had given up T20I captaincy after the 2021 T20 World Cup but BCCI's decision to replace him as India's ODI captain despite him wanting to continue in the post had led to controversy and the batter's relation with the board and president Ganguly became tense and things are still not great between the two.

After losing the South Africa series, Kohli decided to quit as Test captain, and before announcing it, he even called the BCCI secretary Jay Shah. But, as per reports, he didn't bother to call Ganguly. However, Ganguly lauded Virat for taking the team to new heights in all formats of cricket during his tenure as India skipper, adding that the star batter's decision to quit Test captaincy was a personal one and the board respects it immensely.

"Under Virat's leadership Indian cricket has made rapid strides in all formats of the game... his decision is a personal one and bcci respects it immensely... he will be an important member to take this team to newer heights in the future. A great player. well done... @BCCI @imVkohli," Ganguly said in his tweet.

On Wednesday, Virat began a new chapter in his career, playing as a pure batter for the first time in over five years in any format of the game.

(The above story first appeared on LatestLY on Jan 20, 2022 08:10 PM IST. For more news and updates on politics, world, sports, entertainment and lifestyle, log on to our website latestly.com).