Virat Kohli Press Conference: From ODI Captaincy to Opening Up About the Rift With Rohit Sharma, 5 Important Statements By India’s Test Skipper Ahead of IND vs SA Series 2021-22 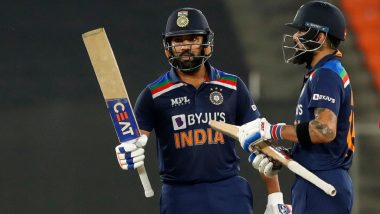 As India is about to leave for South Africa, Virat Kohli addressed the press and this conference will be remembered for a long time now. We bring to you  5 takeaways from the conference where Kohli addressed the rumours of a rift between him and Rohit Sharma, ODI captaincy and a lot more. The ongoing scenario witnessed Virat Kohli's ODI captaincy being taken away. Rohit Sharma is now the was the newly crowned captain for the ODIs. The Mumbai batsman was already leading the team for the shortest format of the game. Virat Kohli Press Conference Live Updates: Virat Kohli Promises to Render Full Support to Rohit Sharma.

What raised the eyebrows was that both Virat and Rohit will be unavailable for ODI and Test series against South Africa. This obviously created a lot of noise among the fans and this time we also had Mohammad Azharuddin who chipped in with his opinion that only fanned the flames. But Kohli as usual came out clean and addressed the questions with the utmost composure. Check out five takeaways from the presser.

Virat said, "I am available for selection for the ODI series against South Africa. No communication with the BCCI about being rested. This question should be asked to the people who are writing about this, not me. These are lies. I have not asked BCCI to rest me," he said.

2. Virat Kohli on Being Informed by the BCCI about ODI Captaincy:

Kohli said that he was informed about him not being the skipper of ODI of 90 minutes before the selection meeting. "I wanted to rest. I was contacted 1.5 hours before the meeting. There was no communication. Chief selector discussed the Test team. The 5 selectors told me I will not be ODI captain. Which is fine," he explained.

3. Virat Kohli Promises Test Captaincy Will Not Take a Hit:

The Indian Test skipper explained no external factors will affect his test captaincy. Furthermore, Kohli opined that he has done his best so far and will continue to do so. "I have been honest and have done that up to my potential. About my batting, when you know you've been doing well, you know how to perform. Those things won't go away. It's about understanding your game and doing what you have been," opined Kohli during the presser.

4. No Rift Between Virat Kohli and Rohit Sharma:

Virat Kohli said that he is fed up with the rumours of a rift between him and Sharma. The Indian captain said he has been clarifying his stance for about two to three years now. While explaining BCCI's decision of removing him from captaincy, Kohli opined that he has not won a single ICC trophy which could have been the cause of sacking him.

Kohli also promised to render full support to the new skipper Rohit Sharma and said that his aim is to push the team in the right direction. "Rohit is a very able captain. Along with Rahul bhai, who is a very balanced coach, both will have my absolute support in whatever vision they have for the team," announced Virat.

India will play three Test matches and an equal number of ODIs against South Africa. The Test series will begin on December 26, 2021. Whereas, the ODI will start from January 19, 2021.

(The above story first appeared on LatestLY on Dec 15, 2021 03:26 PM IST. For more news and updates on politics, world, sports, entertainment and lifestyle, log on to our website latestly.com).