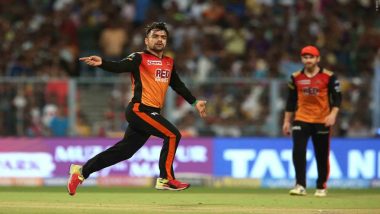 Qualifier number 2 between Sunrisers Hyderabad and Kolkata Knight Riders at Eden Gardens was no less than a thriller with twists and turns. Considering the fact, KKR was playing in Kolkata, it was quite obvious that the home team was the hot favourite for winning the second qualifier. But it was Rashid Khan who stole the limelight by contributing in all departments of the game and outplayed the hosts. After winning the toss, KKR asked the guests to bowl first. (Check out the video highlights of the match here).

Shikhar Dhawan and Wriddhiman Saha opened the innings for SRH and jointly contributed 56 runs to the team’s total. However, it was Dhawan who got out first and then SRH skipper followed him to the pavilion on the score of 3. Shakib Al Hasan and Saha stuck around but soon the wicketkeeper of SRH was out. By this time, SRH needed a good partner for a good score on the board. After the wicket of Deepak Hood and Hasan, it was Rashid Khan who played a magnificent inning by making 34 runs off 10 balls. His inning comprised two 4 and four 6s and the Afghani spinner remained unbeaten. (Here’s the scorecard).

However, when KKR came to bat within the first 4 overs itself they got 40 runs as openers Sunil Narine and Chris Lynn jointly made 40 runs. But a poor shot selection by Narine and Siddharth Kaul sent him packing on 26 runs off 13 balls. Next in line to go was Nitish Rana on 22 runs who looked way too good. Rashid Khan scalped important wickets of Chris Lynn, Robin Uthappa and Andre Russell. Hopes were pinned on KKR skipper Dinesh Karthik who too could not put up a good show and was out on 8 runs. Afghani spinner Rashid Khan also impressed the fans with his fielding and got a couple of important catches. With this, SRH won by 15 runs and they will play against the Chennai Super Kings on Sunday, May 27 at the Wankhede Stadium.

(The above story first appeared on LatestLY on May 25, 2018 11:53 PM IST. For more news and updates on politics, world, sports, entertainment and lifestyle, log on to our website latestly.com).