CSK have failed to chase down 216 against Rajasthan Royals and 176 against the Delhi Capitals. They had started the tournament well and comfortably chased down 163 against the defending champions Mumbai Indians in the opening match of the tournament. But Ambati Rayudu's injury have unsettled the CSK batting line-up. 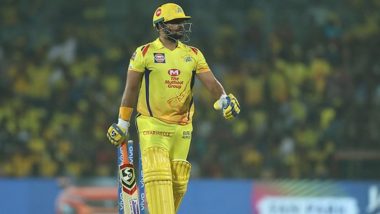 Chennai Super Kings fans called for Suresh Raina to come back to UAE for Indian Premier League 13 after CSK’s 44-run defeat to Delhi Capitals in IPL 2020. CSK failed to chase down 176 and suffered successive defeats leaving them fifth in the IPL 2020 points table after three matches. MS Dhoni-led side have won only one in three games. CSK never really got going in the chase and could make only 131 runs in 20 overs. Fans were left disappointed after the 44-run loss to DC and immediately requested and pleaded with Raina to come back and join the team before their next match. IPL 2020: CSK Fans Call for Suresh Raina Return on Social Media, CEO Kasi Viswanathan Says, We Are Not Thinking About Raina as We Respect His Space.

Raina had left UAE and returned to India weeks before the IPL 2020 due to personal reasons. The CSK vide-captain and Chinna Thala is yer to disclose his reason for leaving the team and coming back to India. Reports and speculations had suggested a possible confrontation with captain Dhoni and owner N Srinivasan over lodging while some had also referred to the murder of his relative in Punjab as the reason for his returning to India. Virender Sehwag Trolls CSK After Their 44-Run Loss to Delhi Capitals in IPL 2020, Asks Chennai Super Kings Batsmen to ‘Drink Glucose’ Before Next Game.

Raina though had not confirmed anything and had requested everyone for privacy. But with CSK faltering in the field and with the bat in two of their three matches, fans have got restless and have requested Raina to return to the team and help CSK qualify for the playoffs. Take a look at some reactions.

Should Have Met Raina's Demand?

Should have just given Raina that balcony

CSK With and Without Suresh Raina?

CSK with CSK without

MS Dhoni and CSK Without Raina

Dhoni and Csk without Raina pic.twitter.com/SBj9V45dCo

CSK With and Without Suresh Raina

Without Raina. With Raina pic.twitter.com/qm01ahoyML

CSK needs Mr. IPL in their batting line up! Raina should think of comeback.

CSK have failed to chase down 216 against Rajasthan Royals and 176 against the Delhi Capitals. They had started the tournament well and comfortably chased down 163 against the defending champions Mumbai Indians in the opening match of the tournament. But Ambati Rayudu, who along with Faf du Plessis, were the heroes in the win over Mumbai Indians, is out with slight niggle, His absence looks to have somewhat unsettled the CSK batting line-up and they have faltered with the bat in successive games.

(The above story first appeared on LatestLY on Sep 26, 2020 01:48 PM IST. For more news and updates on politics, world, sports, entertainment and lifestyle, log on to our website latestly.com).