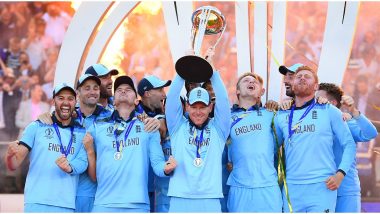 England beat New Zealand to win their maiden cricket World Cup title. It was on this day last year when Eoin Morgan became the first England captain to lift the World Cup after his side triumphed over the Kiwis but the barest of margins. It was also on this day in 2019 that England became the first team to win a World Cup on superior boundary count. Both sides could not be separated by runs or super over after eight hours of intense cricket exhibition and 102 overs. ICC’s controversial rule than took precedence and declared England the winners, courtesy more boundary counts. This Day That Year: India Beat England to Clinch 2002 NatWest Trophy; ICC Relieves Memorable Win on 18th Anniversary.

The 2019 ICC Cricket World Cup final was a blockbuster in so many ways. It had thrill, tense, euphoria and nerve-wracking moments and undoubtedly qualifies as one of cricket’s greatest ever classics and perhaps the greatest final ever played. The Lord’s stadium was packed to the tilt long before even the players could reach the stadium. KL Rahul Is Missing Cricket, Indian Batsman’s Latest Social Media Post Is All About His Love for the Game.

New Zealand captain Kane Williamson had opted to bat first and lost Martin Guptill early. But Williamson and Henry Nicholls steadied the ship with a 74-run stand before Liam Plunkett removed both. Tom Latham then dragged New Zealand past the 200-run mark and little cameos from the middle order took the Kiwis to 241/8, an easy target on any other day but a mighty score in a World Cup final. Chris Woakes and Plunkett were the home side’s most successful bowlers with three wickets each.

England started in the same manner as their rivals and lost in-form Jason Roy early. Joe Root stuck a while before Colin de Grandhomme had him caught behind and started England’s collapse. In the next 28 runs and in between seven overs they also lost Jonny Bairstow and captain Eoin Morgan. Ben Stokes and Jos Buttler then joined hands and re-initiated England’s resistance before launching attacks of their own.

#OnThisDay last year, England claimed the #CWC19 trophy after one of the greatest ODIs of all time.

Stokes-Buttler stitched a century-run stand – the first of the match – and in their company, England looked like they were sailing home comfortably. But Buttler’s rush of blood after he had completed his half-century once again dragged England back. The wicketkeeper-batsman was deceived by a slower Lockie Ferguson delivery and departed for 59 with England still 46 runs behind. Stokes was left alone to take England home.

He tried and survived a catch that went for six and found boundaries on regular intervals but little for company in the other end. When Archer was dismissed in the final delivery of the 49th over, England still needed 15 off the final over and with Trent Boult to bowl the last over, it looked a lost cause.

The first two deliveries were dote, a third over midwicket. It was, however, the fourth delivery that caused drama. Stokes caressed a full-toss to midwicket and signalled two. But was short of crease before the divine intervention of his bat – cricket’s Hand of God – moment. Guptill’s throw would have been a direct hit had it not struck Stokes’ outstretched hand diving to save himself from crushing England’s dreams. The equation came to 2 off 3. Mark Wood departed the next ball running a two and so did Adil Rashid and the game ended in a tie.

England batted again in the Super over and once again Stokes and Buttler ensured they had enough to defend. Jofra Archer was given 15 runs to hand his team a maiden World Cup win. And it looked he had cost them the cup when Jimmy Neesham sent one out of the park. But once again it came down to the final delivery, final run. Like England minutes ago, New Zealand needed two from one ball and Guptill fell short. The match a tie. But England winners.

(The above story first appeared on LatestLY on Jul 14, 2020 10:34 AM IST. For more news and updates on politics, world, sports, entertainment and lifestyle, log on to our website latestly.com).